As history repeats itself… 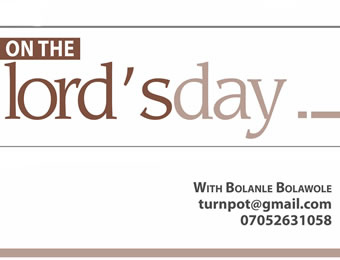 KING Solomon in Ecclesiastes 1: 9 – 11 says: The thing that hath been, it is that which shall be; and that which is done is that which shall be done: and there is no new thing under the sun. Is there anything whereof it may be said, See, this is new? It hath been already of old time, which was before us. There is no remembrance of former things; neither shall there be any remembrance of things that are to come with those that are to come after”This is one of many areas where the Bible is frightfully correct. Otherwise, men would not repeat life history the way they do. Otherwise, Adolf Hitler and Josef Goebbels would not be so precise in their findings that human memory is very short and that you have to tell humans the same truth again and again; and that all you need to deceive the people is weave a tissue of lies and coat it with a thin layer of truth and the people will gobble it down. Otherwise, George Santayana will not be right when he says that what history teaches is that men fail to learn from history. And that those that fail to learn from history are often condemned to repeating its mistakes. NnamdiAzikiwe told a Colonial Officer during those days of the struggle for Nigeria’s Independence that something grievous must be wrong with a Colonial Government that applied the same policies to rule an unwilling people only to lose them in the end with bitterness and rancour. You cannot apply the same methods and expect a different result.

How uncanny history can be! How abject humans are as well! Right under a space of four years history is repeating itself before our very eyes. Humans are behaving as if they learned nothing from history. Between PDP at its apogee and APC in its early stages, people are seeing no difference; instead, they are witnessing in APC the self-same full-blown virus and vices that led to the demise of PDP. APC is applying the same methods of PDP but, surprisingly, is insisting the results will be different. The past is bliss; the present, nightmarish; and the future, dreadful. Think of all that was evil in PDP/Goodluck Jonathan administration and see which of them has not gone from bad to worse under the President Muhammadu Buhari administration. Is it corruption? What corruption can be worse than that the cash-cow, the NNPC, under the very nose of Buhari as Minister of Petroleum Resources, is short-changing Nigeriaopenly and blatantly? Nigerian governors’ efforts to compel NNPC to come clean have failed many times; such that allocations from the Federation Account could not be shared as at when due and salaries and pensions could also not be paid. Zamfara’s Gov.Yari, who leads this fight, is APC like Buhari, not PDP. Impunity has never run this riotous and naked. Maina-gate! Grass-cutting SGF Lawal! Chief of Staff Kyari/MTN! National Health Insurance Scheme cesspit! EFCC versus DSS conundrum! Aso Villa Presidential Clinic drain-pipe! CBN/Forex round-tripping! Buhari now has his own Alison-Madueke and Stella Oduah in KemiAdeosun and Head of Service Oyo-Ita. People are indicted; yet, they sit pretty in office, unpertubed, unruffled! Protected, the carry-go, as they say! Yet, Buhari deludes himself and his coterie of praise-singers insist he is fighting corruption; worse still, that Buhariis not corrupt. Pray, who is more corrupt than the one who shields the corrupt and fails to turn them in for justice?

Jonathan had Chibok girls and Buhari, Dapchi girls. Buhari’s is worse because of the religious connotations involved and which is a time bomb silently ticking. Until and unless Leah Sharibu is released unscathed, there will be an explosion over that issue in the not-too-distant future. To make matters worse is the fascism that is stealthily creeping upon us under Buhari. Freedom of speech and of association, taken for granted under Jonathan, is now under very serious and sustained assault. Political opponents are being assailed; the coercive powers of the State have been appropriated to serve parochial, anti-democratic, and destructive causes. There will be repercussions – and they will be dire.  Jonathan had Boko Haram and the restive Niger Delta. He tamed the latter and grappled with the former to the best of his abilities. He was a “bloody civilian” as they say but Buhari, a two-star General, who promised heaven and threatened hell, has performed worse. In three months, he said, BK would be history! Not only is BK still making history, it is Buharihimself that is on the way to becoming history. In addition to BK, we now have the Fulani herdsmen. Figures say the FH have wasted more lives in less than four years than BK accomplished in over a decade. The bestiality of the FH is something else. If these are humans, then, certainly they are from outer space.

ALSO READ: Shake-up in the army, GOCs, others moved

As we said here two Sundays ago, now APC is unravelling. Politicians are deserting its fold in droves. Leaders who brought Buhari to power have abandoned him. Only court jesters surround him now. PDP stood at this threshold in 2014/2015. Just as PDP deluded itself that it was indestructible, so the APC deludes itself today that it still stands strong and tall. Just as fawning errand boys assured Jonathan that those deserting the PDP had no electoral value, so also are the Adams Oshiomholes of today giving Buhari cold comfort. In the same manner Jonathan was told he would win the 2015 election hands down despite the avalanche of defections that had reduced PDP to a shadow of its former self, so also are lying tongues telling Buhari 2019 is his for the plucking. The opportunistic liars and the fool who buys their wares are birds of a feather. As they say, it takes two to tango. But let me sound a note of warning as we close: The opposition will be taken on the cheap if they do not read Edo, Ondo, and Ekiti appropriately. And as we posit here last week, quoting USSR’s dictator, Josef Stalin, voters may be tolerated to cast their miserable votes but their votes may not count in the end. Unlike under Jonathan when our votes began to count and our elections became more credible, we have suffered serious reverses under Buhari. All the shenanigans of the past have returned in full blast, with the addition of INEC’s technology, whichmakes rigging easier for the powers-that-be. Those who control INEC, the security forces, and an unlimited war chest now stand a fair chance of carrying the day. Here, I want to believe, lies the confidence of the pro-Buhari forces – not the ballot box.

I read your curious comments (Sunday Tribune, 15/07/18, page 29) about the Ekiti State election of Saturday, 14/07/18. The whole world will soon hear what really happened during the election at the Election Tribunal.The rest of the piece under consideration centred on the stock-in-trade of President Buhari in sweeping scandals under the carpet and you did cite many cases to buttress your submissions on the scandalous cases Buharihas swept under the carpet. On the Minister of Finance, KemiAdeosun, you made some comic suggestion.You called on her to “step down, make herself available to the NYSC for mobilization and join the next batch of corps members”  Section 13 (3) of the NYSC Act prescribes a three-year jail term for anyone who fails to turn himself or herself up for the National Service. Adeosun has run foul of the NYSC Act and stands to be jailed. If it is true that she was issued any NYSC exemption certificate, the NYSC officials who processed the certificate are guilty of Section 13 (4) of the same NYSC Act. And they also stand to be jailed .What Adeosun and the officials of the NYSC did are forms of corruption. According to Winston Churchill “Sometimes, it is not enough that we do our best; we must do what is required” President Buhari is waging war on corruption. Is he really doing what is absolutely required about winning the war on corruption? Those who are being protected by Buhari on corruption should not forget what happened to former governors Joshua Dariye of Plateau and Jolly Nyame of Taraba states. They should also note that the gates of Nigerian prisons will always remain opened! —Deacon Dapo Omotoso, Ado- Ekiti.

Your consecutive articles in the last three weeks were illuminating and incisive. The post-mortem  “Ekiti Election and the shape of things to come”, the pungent analysis “Adeosun: A question that must be answered and the prognosis “Now that APC is unraveling”  remain constructive, audacious, and candidly advisory to those who have ears to listen to your worthy advice in accordance with the Yoruba time-tested admonition.

The three articles could be considered a TRILOGY with the most appropriate title -”CORRUPTION INCORPORATED IN APC.” You extensively used and repeated the word “corruption” umpteen times in the articles and convinced your readers with some evidence-based arguments that APC as a party, coupled with its modus operandi about governance, is far worse than PDP. And that is the truth if the unfolding scenarios about governance in Nigeria under the watch of President Buhari since May 2016 are considered in totality.

APC is a personification of corruption. The telltales are too obvious. The Ekiti  State gubernatorial election victory by Fayemi was nothing but pyrrhic victory, which was achieved at a high cost and adjudged incredible because it was compromised by the use of very partisan security forces, biased electoral umpire, and open corruption through vote-buying under a regime ostensibly fighting corruption but which reeks of  corruption from head to toe.

The Adeosun NYSC allegedly forged exemption certificate saga and the golden silence of the accused on the matter is a collective insult on Nigerians both at home and in the Diaspora. If it were in a saner clime, heads would have rolled. But in Nigeria, “shame” has been deleted from our national lexicon.

Many people that President Buhari surrounds himself with are pusillanimous. They are deliberate in not telling him any truth because of self-preservation. They want to remain in the corridor of power and be taking advantage of a President who “just wants to enjoy perquisites of office” as you pointed out, but hands over important issues of governance to dead-brain, thieving and ego-centric cabals who have the erroneous belief that “without them, nobody becomes somebody.”

With the current happenings in our polity, where some shameless politicians are engaged in a forward-backward defection from one party to the other, our proverbial light at the end of the tunnel is becoming dimmer and may soon extinguish as a result of the leadership’s innumerable malfeasance, untamed corruption, and open nepotism – all of which you have written a plethora of warning articles about, being a true patriot with the love of the country at heart. But APC pretends to see no evil and hear no evil.

Redemption for us as a country can only begin with the acceptance of our past mistakes and we should be honestly ready to make amends where necessary. With the antagonist and combative posture of the present administration to constructive criticism, sorry, I don’t see that happening on the immediate horizon. —AbiodunYacoob, Parkview Estate, Ikoyi, Lagos.

My sensuous kiss in Big Brother was real —Lolu