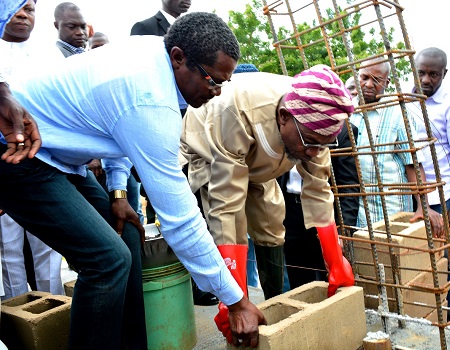 GOVERNOR Rauf Aregbesola of Osun has laid the cornerstone a N2.7 billion Osun shopping mall, saying the project when completed would complement the modern transformation of Osogbo, the state capital.

Aregbesola, who disclosed that the project, occupying a 5,000 square metres of land is a private venture of Independent Shopping Mall Limited with ultramodern state-of-the-art retail, entertainment, relaxation and dining facilities, including retail shops, food court and three cinemas, assured that it would be completed before the expiration of his tenure.

This was contained in a press statement signed by the media adviser to the governor, Mr Sola Fasure, which was forwarded to the TribuneOnline in Osogbo on Tuesday.

Delivering a speech titled, “Our Road to Modernity”, during the foundation laying ceremony, Aregbesola noted that the project was embarked upon with a view to creating a sustainable environment conducive for human habitation and improved economic growth.

He maintained that his administration had given the state, particularly Osogbo, a befitting facelift of socio-economic development which can never be matched by any government since the creation of the state, stressing that “there will be all-round power system for the complex.‎ When completed, it will complement Nelson Mandela Freedom Park, which is just nearby, to provide recreation for the people of Osun”.

According to Aregbesola, “our people will not need to travel to Ibadan or Lagos to enjoy such facilities anymore so, this Osun Shopping Mall will be the father of all the projects we have completed in Osogbo and I am immensely grateful to God for the cornerstone laying ceremony we are all gathered here to perform today”.

In his remarks, the project developer, Architect Gboyega Adeeyo, disclosed that the project will be completed before the expiration of the present administration, adding that the company will ensure full participation of Osun citizens throughout the construction of the project as being mandated by the governor.

He posited that “there is no doubting the fact that the present administration has done so much to advance the state in terms of infrastructural development as being seen in the volume of developmental and life-changing projects the state had executed in the last seven and half years”.