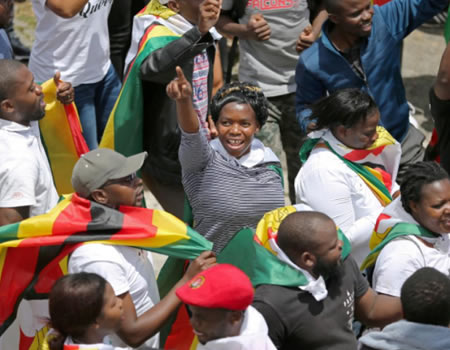 IT is the case of a new sun rising on the debris of Zimbabwe after the rain, as Robert Mugabe’s resignation elicited reactions across the global community.  A mixed feelings euphoria and disapprobation clouds the globe.

Leaders both in Africa and internationally as well as the people through social media platforms have begun to share their thoughts on former President Robert Mugabe’s resignation.

SHERIFAT LAWAL captures how some government officials and Zimbabweans reacted to the news of the end of Mugabe era.

We expect all leaders to listen to their people —UN

Farhan Haq, Guterres’ spokesman, said “the Secretary-General and his predecessors have made clear that we expect all leaders to listen to their people.

“That is a cornerstone of every form of government and needs to be followed in every continent and in every nation.”

Alpha Conde, president of Guinea and African Union (AU) chief, said it is “a shame” Mugabe “has to leave through the back door”.

He added, however, that he was “very pleased” with Mugabe’s decision to resign, noting that the AU had warned against a coup in Zimbabwe.

“Mugabe will never be forgotten, he was a great fighter,” he was quoted as saying by Guinean media.

Mugabe’s resignation, opportunity to forge ahead —Theresa May

In Britain, Zimbabwe’s former colonial power, Prime Minister Theresa May said the news of Mugabe’s resignation was an opportunity to “forge a new path free of the oppression that characterised his rule”.

“In recent days we have seen the desire of the Zimbabwean people for free and fair elections and the opportunity to rebuild the country’s economy under a legitimate government”, she added in a statement.

“As Zimbabwe’s oldest friend we will do all we can to support this, working with our international and regional partners to help the country achieve the brighter future it so deserves,” May said.

“The resignation of Robert Mugabe provides Zimbabwe with an opportunity to forge a new path free of the oppression that characterised his rule. In recent days we have seen the desire of the Zimbabwean people for free and fair elections and the opportunity to rebuild the country’s economy under a legitimate government,” she continued in the short statement.

It’s opportunity for Zimbabwe to tread a new path —US

The United States State Department released a statement congratulating the people of Zimbabwe.

“Zimbabwe has a historic opportunity to set itself on a new path. Through that process, the United States urges unwavering respect for the rule of law and for established democratic practices”, a statement by the US Embassy in Zimbabwe said.

China said that it respects Robert Mugabe’s decision to resign as Zimbabwe’s president, a week after the African country’s army and Mugabe’s former political allies moved to end his four decades of rule.

Chinese foreign ministry spokesman, Lu Kang, made the remark during a regular press briefing, adding that China’s policy toward Zimbabwe would not change.

Robert Mugabe resigned with immediate effect on November 21, but it’s unclear whether there will be an investigation into some of the allegations against him and his wife, former First Lady Grace, who is accused of usurping her husband’s executive powers.

However, while most people are celebrating Mugabe’s exit, there are those whose happiness is tainted by the fear that Mugabe’s government may resurface.

Wellington Moyo, a 36-year-old news vendor, told Al Jazeera he’s pleased the army has done its job and hopes the promises of “a new Zimbabwe” made to the people will be upheld by those who take over.

“I’m very happy that the will of the people has been heard and the army has done a great job. The bigger part of the job has been done now, and I look forward to the new leaders keeping their promises to listen to the people’s wishes,” he said.

“I’m nervous that that system of oppressing might never end, but we as people can never return to that style of Mugabe, it really has to be over”.

David Sulumeti another Zimbabwean begs to differ hearing his opinion on Facebook saying Libyans were fooled to remove their leader Gaddafi who turned a desert into a nation, now it’s only been few years after his death Libya is slowly turning back to a desert it was. Where are the Americans now when Libya is on the verge of vanishing? Zimbabweans after removing Mugabe, you’re next.

The celebration that followed Mugabe’s resignation seems to have ended and Zimbabweans are returning to their ordinary lives where parts of the country remain desperately poor after years of economic mismanagement and corruption under Mugabe’s rule.

However, whether there will be an investigation into some of the allegations against Mugabe and his wife, former First Lady Grace, who is accused of usurping her husband’s executive powers, is still unclear.