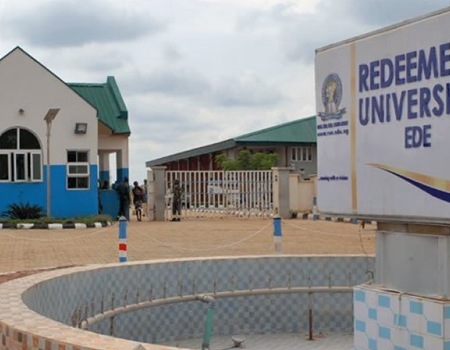 The feat recorded by the Redeemer’s University, Ede, Osun State, in 2014 through its tremendous contribution to the containment of the Ebola disease in Nigeria resonates again with the outbreak of the New Coronavirus epidemic.

The university recorded the breakthrough through its Africa Centre of Excellence (ACE) for Genomics of Infectious Diseases.

It was at Redeemer’s University where the first sample of Ebola was tested in Nigeria and the university published world-class research on the Ebola virus in Nature Science.

Tribune Education recalls that the index case of Ebola in Nigeria was a Liberian-American, Patrick Sawyer, who flew from Liberia to Nigeria’s most populous city of Lagos on 20 July 2014. Sawyer became critically ill upon arriving at the airport and died five days later.

As panic gripped Nigeria in view of the deadly nature of the infectious disease that had already wiped out families in Liberia, the Redeemer’s University was able to develop a tool for identifying and diagnosing the Ebola virus in 10 minutes. This tremendously helped Nigeria in containing the spread of the disease.

The Africa Centre of Excellence for Genomics of Infectious Diseases at Redeemer’s University that recorded this breakthrough is among the 10 ACE project centres being hosted in Nigeria under the first phase of the World Bank-funded programme.

As part of initiative to leapfrog Nigeria and other African countries from the tepid development challenge, the World Bank had in 2013 approved sponsorship of 22 African Centres of Excellence (ACE) in some universities in West and Central Africa.

Nigeria was awarded 10 out of the 22 centres in the first phase of the ACE project, after rigorous selection process and scholarly presentations from the participating universities.

In all, Nigeria is currently hosting 17 of these centres of excellence having also benefited from the second and third phases of the project in which the World Bank has committed over $580 million.

But as the first phase of the project comes to a close in March, 2020, stakeholders from 53 universities located in 12 West African countries converged on Abuja to brainstorm on how to consolidate on the gains and strengthen implementation and impact of the project.

The workshop, held a time the coronavirus outbreak in China is spreading to other countries of the world prompted the Federal Government and other stakeholders to challenge the centres on possible measures to contain the crisis.

Based on the initial successes, the World Bank and the French Development Agency, in collaboration with African governments, launched the ACE Impact Project in 2018 to strengthen postgraduate training and applied research in existing fields and support new fields that are essential for Africa’s economic growth.

Executive secretary of the National Universities Commission, Professor Abubakar Rasheed, speaking at the workshop in Abuja, noted that apart from intervention of one of the centres of ACE in Nigeria during Ebola, other participating institutions have recorded remarkable breakthroughs in their areas of specialisation.

According to him, ACE project is the first regional results-based higher education project; which means that it is financed based on results achieved by each centre.

These results, otherwise known as Disbursement Linked Indicators, include publishing in international peer review journals; quality benchmarks, including international accreditation, internship of students in industry as well as enrolling Masters and PhD students.

Rasheed added that one of the key results was the push for university-industry linkages through internships, with the number of participating students growing from 325 in 2014 to 386 in 2015 and 832 in 2016.

He said the ACE1 project has had tremendous impact on the hosting universities in Nigeria, and that 189 PhD and over 1,000 Master’s degree students have graduated from the various programmes under the ACE project, with another 1,000 trying to finish their Master’s degree programmes.

“One of the Nigerian ACEs spearheaded the containment of the Ebola virus outbreak in 2014 and subsequently developed a 10-minute testing kit for both the Ebola and Lassa Fever viruses.

“Another Nigerian ACE also developed the anti-snake venom vaccine known as COVIP-Plus; and numerous other achievements.

He revealed that following the successes recorded in ACE 1, the Central Bank of Nigeria (CBN) and the Tertiary Education Trust (TETFund) have introduced Centres of Excellence in some universities in Nigeria.

Rasheed explained that the CBN had commissioned three Centres of Excellence in University of Nsukka, University of Ibadan and Ahmadu Bello University Zaria, while three more are about to be completed in Bayero university, Kano; University of Jos, and the University of Port Harcourt.

“We are also happy that TETFund has now decided to follow suit to start with 12 universities and 22 Centres of Excellence across the six geopolitical zones. From the selection, some of the centres would be in the area of health, agriculture, food security, renewable energy, two of the centres would be for Security Studies and Peace Building.

Education specialist, World Bank, Dr Ekua Bentil, told journalists in Abuja that the World Bank has so far committed over $580 million to the African Centres of Excellence project to bridge the skill gaps and boost research in the continent.

She disclosed that the project has led to graduation  of over 9,000 Masters degree students as well as PhD students from various programmes in the 22 Centres in the first phase of the project that started in 2014.

Minister of State for Education, Honurable Chukwuemeka Nwajiuba, while declaring the workshop open , said the Federal Government, through the Ministry of Education, would continue to work hard to ensure the sustainability of the project beyond its initial life cycle.

Nwajiuba, who was represented by the Permanent Secretary, Federal Ministry of Education, Sonny Echono, thanked the World Bank and other partners for ensuring the success of the ACE1 programme.