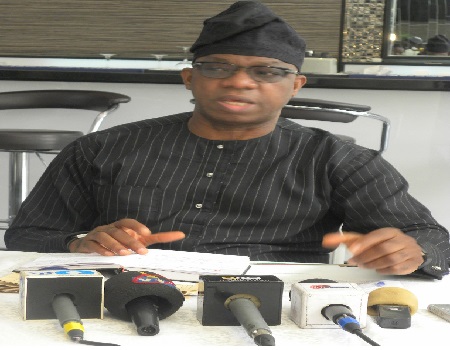 THE Chairman of Corporate Affairs Commission (CAC), Prince Dapo Abiodun, has vowed to defeat the consensus governorship candidate of the All Progressives Congress (APC), Hon. Adekunle Akinlade, in the direct primary scheduled to hold on September 25th.

He stated this in a statement issued by the media team of the Dapo Abiodun Campaign Organisation made available to the Tribune online on Tuesday morning, that the consensus arrangement has allegedly scripted by the State Governor, Senator Ibikunle Amosun, was nothing but a “dramatic fiction”.

Abiodun who is a governorship aspirant on the platform of the party, made the claim while addressing 236 wards and 20 Local Government Ward owners and coordinators at his Iperu country home, on Monday.

The event was aimed at sensitising them on the ongoing continuous membership registration of APC.

He urged his supporters to stand firm and steadfast assuring them that “we are going to have a direct primary as instructed by the National Working Committee of our great party” and we shall win.

The meeting attracted several notable party leaders from the three senatorial districts of the State.

One of the leaders who spoke at the event, Chief Bode Mustapha, said they were at the meeting in solidarity with the aspiration of Abiodun and the yearnings of the people of Ogun State for improved leadership from someone who is capable and competent.

Mustapha who was the Director General of Amosun’s re-election campaign in 2015 informed the party members that the alleged “consensus” gubernatorial aspirant presented by governor Amosun is a farce because it was unilaterally done by the governor against the values and ideal of our party which promotes true democracy.

He slid Abiodun remains the most credible and most qualified aspirant who can transform Ogun State to greater heights and consolidate on what it has been achieved so far.