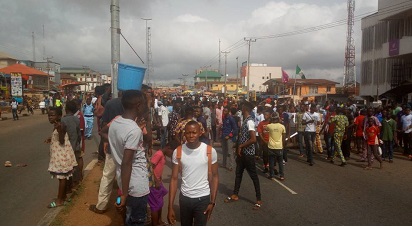 THE protest of the Students of Adekunle Ajasin University, Akungba Akoko (AAUA) Ondo state, took a new dimension on Wednesday, as the protesting students allegedly attacked the convoy of government officials and security operatives in the state.

The students who resumed their protest as the protest entered its third day, blocked all roads leading to the government house and state secretariat, while the convoy of a government official ran into the protesting students at Alagbaka on the way to the Government House.

The students attacked the convoy and forced the convoy to turn back towards government house, forcing the officials to take another route to the governor’s office.

The students were, however, dispersed by a detachment of the Nigerian mobile Police and men of the Nigerian Security and Civil Defence Corp (NSCDC) who chased the students away from the Government House gate and Oba Adesida road with tear gas.

Traders at the Oja Oba market closed their shops as a sign of solidarity support for the students, describing the new increase as outrageous.

Market and stalls were closed in the main market, paralysing the socio-economic activities at Akure the state capital, while vehicular movement was hindered for many hours.

Similar, the protesting students converge on Ikare Akoko, condemning the action of the state government, calling on traditional rulers and community leaders to intervene and call governor Akeredolu to order.

The spokesperson and the leader of Akoko students, Sunday Ajibua called for immediate reversal of the tuition fees to save education in the state.

However, the state Police Command confirmed that some government officials were attacked and stoned by the students, disclosing that 46 suspects have been arrested by security agents in the state, noting that the protest had been hijacked by hoodlums.

Speaking on the development, the state Police Public Relations Officer (PPRO), Femi Joseph, said a preliminary investigation revealed that only 12 out of the arrested suspect are students of the State University while 36 others are non-students or parents of the students.

He said some vehicles belonging to security agents were also stoned with bottles, stones and pebbles saying “this was why we had to come in, to say enough is enough.”

Joseph said the students may have genuine reasons to protest but frowned over the destruction of government properties and attacks on the people of the state.

Joseph said “If the students have reasons to protest, it is their constitutional rights, if your government brings out any policy or decision that do not go down well with you, you can protest peacefully.

“But when you begin to cross the line of decency, embarking on the destruction of lives and properties, blocking the highways and embarking on a looting spree and damaging government properties and even wanting to invade the government house, we will not allow that, that was that we have to come in.

“We have been appealing to the students to embark dialogue since the beginning of this protest but they allowed hoodlums to hijack this protest and we would not fold our arms and allow this to continue.”

The PPRO said those arrested would be properly screened and anyone of them found wanton would be legally dealt with.