4 docked over alleged theft of cell phone worth N40,000 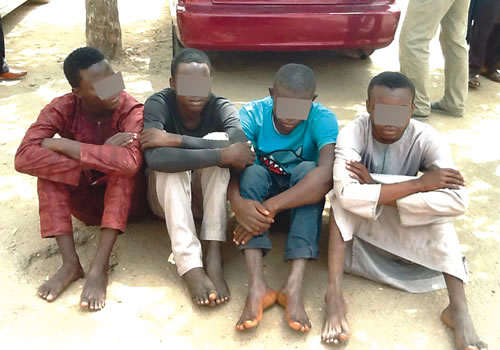 Four men on Friday appeared before an Ojo Magistrates’ Court, Lagos, for allegedly stealing a Samsung Galaxy phone worth N40,000 belonging to a student of the Lagos State University (LASU).

They are standing trial on a three-count charge of felony, unlawful possession and stealing.

The prosecutor, Insp. Uche Simon, told the court that the accused had on June 16, at about 2:00p.m. at the Lagos State University (LASU) Campus, Ojo, Lagos, committed the offences.

Simon said the accused disguised as students in the midst of the Christian Students Association members during a prayer session.

“These four men disguised as students of LASU and joined in a special prayer session in the campus church hall and stole the cell phone from one of the students’ pocket.

“When an alarm was raised, the students immediately conducted a search and recovered a Samsung Galaxy phone valued at N40,000 belonging to a student, Olaniyan James,’’ he said.

The Magistrate, Mr Paul Adedamola, granted each of the accused N20,000 bail with one surety each, who must present evidence of employment in a reputable company.

The case was adjourned till Sept. 13 for mention.