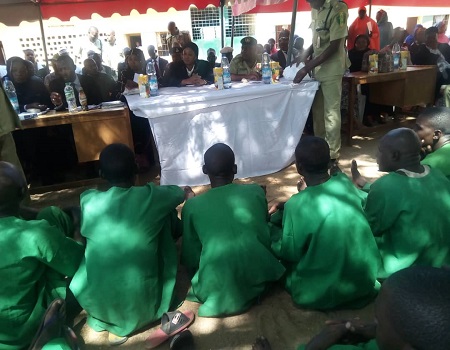 Twenty-seven suspects who are awaiting trial for various offences in Bauchi state have been granted amnesty by the Chief Judge of the State, Justice Rabi Talatu Umar after completing visits to all Correctional service centres across the state with the aim of decongesting them.

The visits by Justice Rabi Umar led State Administration of Justice Committee constituted by the Sen Bala Mohammed Abdulkadir PDP led administration to undertake a routine quarterly visit to Correctional Service centres with a view of reviewing cases of awaiting trial inmates who must have spent three years and above without trial in the bid to decongest such centres.

The committee which comprised of representatives of the State Custodial Centre, Directorate of State Service (DSD) and the Nigerian Bar Association (NBA), among others, had during the first quarter when it started the assignment, released 29 awaiting trial inmates across the correctional centres of the state.

While releasing twenty-one out of the 27 awaiting trial inmates at the Bauchi Custodial Centre on Wednesday, most of whom have spent five to six years without trial, the Chief Judge urged them to be of good conduct and exemplary behaviour as they get back to the society, having regained their freedom.

She further warned that should anyone henceforth perpetrate any crime and found himself or herself back at any of these centres, the story would have been a different thing entirely as, according to her, she will not take it lightly with such person.

Justice Rabi Umar also asked the freed to seek forgiveness from their respective family members for committing such atrocities or acts, and urged younger ones among them to seek knowledge from schools or any other learning centre or institution with a view to becoming useful members of the society.

She told the released persons: “See the regaining of your freedom as an act of God, not because of any influence or your position in the society before, you should also not brag-up for the freedom you regain, as doing so will be disobedience or ungrateful to God.”

The Chief Judge also said that the exercise is a continuous one as the law has given her the power to look into where people are unnecessarily remanded without trial, about what attributed the long stay of the inmates without trial to non-duplication of their case files.

One of the freed people, who spoke on behalf of others, Inuwa Hamza Wanzam thanked God and the committee for the gesture and said that their release will be an end to the Correctional Service walls.

While in Katagum Emirate where there are two centres, Zaki and Azare, the committee took time off to visit the Emir’s palace where the emir, Umar Farouk Umar assured of his council’s support and cooperation to enable the commit to succeed in its assigned responsibility.

The Emir described the judiciary as the last hope of the common man, where he or she still has the confidence, however, expressed dissatisfaction on some unnecessary detention in collaboration with some judges, saying people should be given their rights.

He, therefore, warned those judges who unnecessarily detain some citizens that the prayers of such detainees are easily accepted by God, saying “People are being detained unnecessarily on common issues”.

Umar Farouk also expressed the fear that if the common lose confidence in the judiciary, there is every possibility that people will start taking laws into their hands, adding “police can only investigate for the judiciary to try, hence the need for good synergy between the two organs”.

Other six awaiting trial inmates released include four in Azare and one each in Misau and Jama’are correctional centres, thus putting the number of inmates who regained the freedom to 27.

One killed as PDP, APC supporters clash in Bayelsa