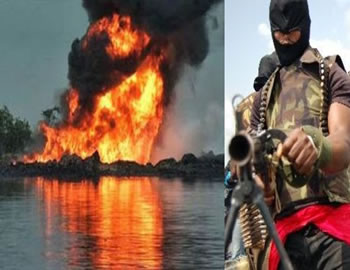 The destruction, according to the hoodlums, was executed at about 1:00a.m Thursday.

Spokesperson for the militant group, Gen Aldo Agbalaja, in a statement made available to journalists electronically on Thursday, the attack was part of the group’s commitment to teach the Nigerian government and its oil multinationals some lessons.

“As a mark of our commitment to a just course and to prove to the wicked and ungrateful multinational oil companies and their Nigerian military allies, who have been forcefully taking our natural endowment, without any visible returns, that we own our lands, the Opudo Strike Team of the Niger Delta Greenland Justice Mandate, at about 0100hour today 29th sept 2016, bombed the Unenurhie-Evwreni delivery line in ughelli south/north respectively operated by NPDC.

“For the avoidance of doubts, we want to say here, categorically, that no amount of military protection/presence can stop this whirlpool, no amount of shoddily arranged military operation can quell the will of our gallant army.

The group, which threatened few days ago to make a “loud statement” through its dastardly economic activities, warned that it would not sheathe its sword until the Federal Government “turn a new leave, adopt a sincere attitude, give back to our people what naturally should be theirs, advise the government rightly, stop thinking there’s an army to protect you from justice, do these and all that you know are good.

“If you do these, be assured to have a good relationship with our people and real protection for your personnel and assets across our lands.”

No official confirmation could be got from officials of NPDC as of the time of filing the report.