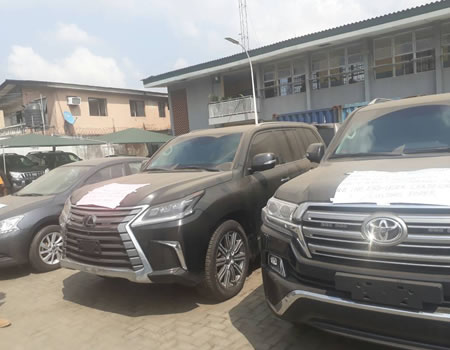 The Nigeria Customs Service (NCS), Federal Operations Unit, Zone A, Ikeja on Wednesday said it intercepted 22 truck loads of foreign parboiled rice and 64 units of vehicles worth N1.6bn smuggled into the country from neighbouring countries.

This was disclosed by the Customs Area Controller (CAC), Federal Operations Unit (FOU), Zone A, Compt. Muhammed Uba Garba while addressing journalists in Lagos on Wednesday.

The bags of rice, according to the CAC has a Duty Paid Value (DPV) of N164million while the vehicles have a DP value of N1.3billion.

According to Uba Garba, “After intensifying our operational modalities to meet up with the current smuggling tactics most especially as the Yuletide draws closer, we have intercepted various contraband with a (DPV) of over N1.6billion.

The CAC who stated that the service would enforce federal government policy on importation of vehicles and rice through the land borders to encourage local production.

Speaking on the vehicles intercepted, the CAC said about 57 vehicles allegedly smuggled into the country were evacuated from an estate in Lagos.

“While 57 vehicles were evacuated based on Intelligence report along Omole estate, Ojodu and Olayiwole close Lekki Phase One, the remaining seven were intercepted while on information patrol along Ijebu-Ode expressway.

“As I speak with you, nobody has come forward to claim ownership yet because we doubt if they have any Customs papers on the vehicles, not to talk of the End-user Certificate for the bullet proof,” the Customs CAC added.

Time magazine names ‘The Silence Breakers’ Person of the Year

There is no reason for the postponement of convention —Makarfi