When a woman is involved 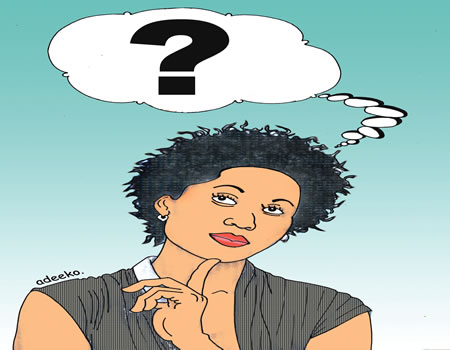 I  don’t know what you’ll call this; maybe feminism, maybe gender bias or you may as well say it’s anti-African but for me, it humanism, gender fairness and doing what we can.More often than not, we complain of underdevelopment of the Africancontinent and that, we blame on poor leadership, corruption and so many other variables. But has it ever crossed your mind that there must be something we aren’t going right? This continent is magnanimously blessed with human and natural resources and its prospects, so enormous but the unfortunate fact is, for some unfounded reasons we have refused to exploit the full potentials. So much efforts have been made to solve the problems of poor leadership and corruption but can we proudly say that has solved the issue of underdevelopment of this continent? Well, I don’t think so. There is a common saying that “if plan A fails then, try plan B” If our plan A has failed, then I think it’s time to search for a plan B.

The female gender, up till this present day suffers marginalisation and the Africa culture and tradition believes, treats and thinks so less of her and as such has refused to tap from the sweet wisdom and altruism embedded in her by Mother Nature. A few weeks back, a young man was trying to defend his inefficiency and was so quick to blame it on his female boss; in his words; “you know she’s a woman and so it’s not everything I must tell her” That was an insult, a very big disrespect to our mothers. I don’t intend to press this too much. But the point is, the African mentality that a woman’s voice shouldn’t be heard and her opinion shouldn’t matter, calls for concern. When I was a child, I remember my father always solicited for my mother’s prayers even though he hardly discussed his plans with her or solicited for her advice beforehand but was always quick to run to her whenever his plans got wrong or things didn’t turn out as he expected and this is same for many homes. My father of course was and is still a wonderful, loving, caring and supportive father and if given the opportunity, I think he will definitely pass for the best dad ever but that African mentality is inherent in the mind of almost all Africans irrespective of their genders. Now, my question is, if she can pray to God and He listens and answers then, what makes you think she cannot talk to you and you listen too?

The underdevelopment of this great continent ranges from educational, social, economic, infrastructural and even political. For many decades we have been working on plan A now it’s time to exploit plan B without restrictions.

I schooled in a Federal Government College far away in North-West Nigeria and back then, the population of boys to girls was 68:7 and we only occupied a small corner in the classroom. One day, as I walked into the classroom after the mid lessons break, one rude and unpleasant classmate of mine walked up to me as though trying to spite or maybe know what my response would be. He giggled mischievously while attempting to be better audible “oh good you’re here, I was just telling these girls” (he gestured at them sarcastically)“that you girls have no reason to be in school and it’s just a waste of money to educate a woman, after all, we will be the ones to marry and provide for you so, instead of wasting your time, energy and your parents’ money I think it’s better you remain at home and learn your roles as wives.” He  fixed his gaze at me waiting for my reaction. I felt a huge lump formed in my throat.

I swallowed hard and gently walked to my seat trying to hide my feelings. Of course, I felt really bad as his words continued to play through my mind. I sat and calmed down and then, beckoned on him and swiftly he rushed to me hoping to spite me even more. It was obvious he had planned this attack and came fully prepared but unfortunately, he found his match in me and even though I had a very short time to prepare, I was ready to confront him with the force of a wind and of course, objectively. I understood his problem was simply ignorance, lack of exposure and maybe his background but simple as it seemed, the problems were actually huge, dangerous and pathetic. He actually expected me to be very furious and engage in some kind of baseless, demining and high pitched argument lacking of concision just like the other girls did but off course, I deduced that the situation was more psychological than emotional and so there was absolutely no need to be angry or express any form of emotion. The petite, shy, innocent yet intelligent me had to handle it from a psychological angle as required. I was known to be very shy and gentle girl who only spoke when she had to but this time my right, pride and dignity were at stake and I wasn’t ready to let go without a constructive and objective fight and seeing how sad the other girls looked urged me even more. It wasn’t just my fight but a fight for the oppressed and for the entire womanism. I started in a very soft but concise way: “Clement, you being a boy does not in any way makes you better and don’t you mistake this conversation to mean me coming down to your level but of course, I realise you truly need education; the type you may not be fortunate to get in school.

“I agree you have a right to your thoughts and opinion but judgement, unfortunately no. In my opinion, I think intellectual abilities should do the judgement and the last time I checked I was far better in that aspect. Judging by that, “I smiled, with every evidence that shows mischief” don’t you think your education is actually the waste you talked about? But unfortunately, your condition is even worse because you are not just educationally incapable but you also lack the intellectual capability to even learn anything and that is so pathetic because you can’t even meet the so called man’s responsibilities and that amounts to you being a monumental waste of existence.” The entire classroom was as silent as a graveyard and the once lousy and rude Clement suddenly became calm and cool but I saw the rage of fire in his eyes. He quietly and shamefully walked to his seat and his voice wasn’t heard again for the rest of the day and even weeks after. I felt fulfilled and that incident built courage in the heart of the other girls.

So many girls may have been brain washed and humiliated out of school by the likes of Clement and that is so unfair. I don’t mean to sound judgmental but most men feel intimidated by the simple effort of a woman to be efficient and productive; all their thoughts navigate to gender sentiments and a feeling of insecurity but the truth is, she’s in no competition with anyone but rather trying to contribute her own quota to humanity.