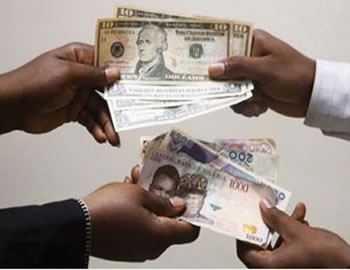 The floating naira exchange rate ended at N281.23 to a dollar on Wednesday, slightly stronger than the N282.3 to the dollar it traded at on Tuesday.

This is even as the Central Bank of Nigeria (CBN) and Citibank on Wednesday executed the country’s first naira-settled futures trade against the dollar, market regulator FMDQ OTC Securities Exchange said.

On Monday, the central bank introduced an over-the-counter futures market on the currency, to help manage dollar demand, quoting the naira firmer at N279 to the dollar in a month’s time and at N210 by April next year.

At the parallel (black) market, the situation is returning to business as usual, as the effects of the new foreign exchange regime seem to be gradually fading out of the market operations.

The local currency gained N2 on Wednesday, as it closed at N350 to the dollar, according to the Acting president of Bureau De Change Association of Nigeria (ABCON), Alhaji Aminu Gwadabe.

On Monday, the naira lost ground to the dollar, falling from N345 on Friday to N347, only to fall further last Tuesday to N352.

Similarly, Nigerian Tribune findings revealed that many banks are transacting at the “floating” interbank market rate of N280 to N284 to the dollar, while some have banned international transactions with Naira cards altogether.

In a mail sent by Stanbic IBTC to its customers on Tuesday, the bank said it was charging N310 to the greenback, as against N282.3, which the interbank market traded on the same day.

“We wish to inform you that you can now stay up date on our card rates by simply visiting our website,” the mail read in part.