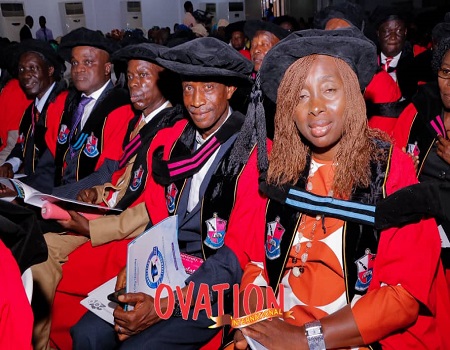 In order to deliver on its mandate of projecting itself within the emerging global systems of higher education for partnerships and collaborations, the first private university in Ibadan, Lead City University (LCU ), has signed Memoranda (MoU) of Understanding with the Nigerian Institute of Medical Research and American International School of Medicine in Guyana, South America, for medicine, medical health and environmental health programmes.

With the MoU signed with the Nigerian Institute Medical Research, LCU has formed linkages and international collaborations to foster global competence and sharing of experiences towards the attainment of global academic best practices.

These among other outstanding achievements according to the vice-chancellor of the university, Professor Aderemi Kabiru Adeyemo, were part of the efforts made on academic and professional relationships during the 2018/2019 academic session, while delivering his address at the 12th convocation ceremony of the institution.

The application for the grant, he disclosed, was the initiative of two lecturers of the department, Dr F.C. Adesina and Mrs O.A. Aiyelabola, who submitted proposals for the award and worked tirelessly on other parts of the application process.

Congratulating the graduands, the vice-chancellor charged them to be good ambassadors of the university.

He urged them to stick to its core values, which include self-reliance, relevance, excellence, self-confidence, honesty and self-independence.

“Always remember that you have become a golden fish that has no hiding place. Let the whole world know that you are agents of change and remember that nothing is impossible as long as you set your minds to it,” the VC said.

He lauded the pro-chancellor and chairman of the council, Professor Jide Owoeye, for the uncommon passion he has demonstrated with regards to the rapid advancement of the university, saying “you have been an inspiration and have continuously provided exemplary leadership for which the university is most grateful.”

He also appreciated other principal officials of the institution, the management team and staff, whose efforts he noted had helped in shaping and sharpening the minds of the graduands, as he congratulated and thanked the parents for the sacrifices made towards the graduands’ academic journey.

At the ceremony, two eminent personalities: His Royal Majesty Oba Adedokun Omoniyi Abolarin, Aroyinkeye 1, the Orangun of Oke-Ila Orangun and Ambassador (Dr) Adeyemi Dipeolu, the Special Adviser to the President on Economic Matters, Office of the Vice President of Nigeria were presented with honorary degrees in Governance and Public Administration and Economics and Diplomacy respectively, for having excelled in their various fields of endeavours.