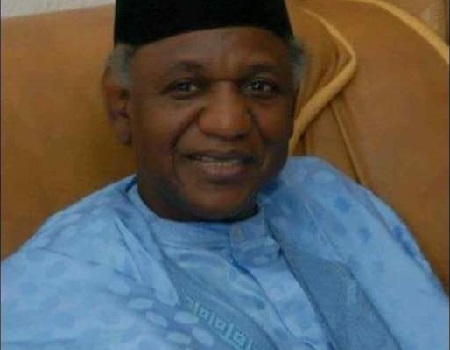 A press statement from the Directorate of Press Affairs, Government House Gombe signed by the Senior Special Assistant to Gombe State Governor, Junaid Usman Abubakar contained that the death of Habu Hashidu occurred in the early hours of Friday in his house in Gombe.

The statement reads, “this is to officially announce the death of the first civilian Governor of Gombe State, former Governor, Alhaji Abubakar Habu Hashidu, Matawallen Dukku”.

The late Habu Hashidu was born in April 1944 in Hashidu town, Dukku local government area and he was one time General Manager of Gongola\Jama’are River Basin Authority as well as a Commissioner of Agriculture an Water Resources in the former Bauchi.

After the end of the administration of IBB late Habu Hashidu retired from active civil service and joined active politics, he contested and won the governorship seat of the state in 1999 under the platform of the defunct All Peoples Party (APP) defeating Ambassador Yerima Abdullahi.

Habu Hashidu was only able to spend one tenure as Governor of the state has lost his reelection bid to the immediate past Governor, Muhammad Danjuma Goje in 2003.

Abubakar Habu Hashidu who was in the forefront for the creation of Gombe state from Bauchi served as the Secretary for the Movement for the Creation of Gombe State a struggle which ended in 1996 when the then Military regime of late General Sani Abacha created the state out of the then Bauchi state.

Late Abubakar Habu Hashidu is survived by one wife, Hajiya Aishatu Habu Hashidu and eight children among whom is his first daughter, Hajiya Iyami Hashidu who is the Commissioner of Community Development and Poverty Alleviation in the present administration of Governor Ibrahim Hassan Dankwamb.

While condoling his immediate family, Dukku Emirate and the entire people of Gombe State, Governor Hassan DanKwambo prayed for the repose of his gentle soul in aljannat fiddausi.

The funeral prayers and burial are scheduled to be held by 5 pm in Gombe.