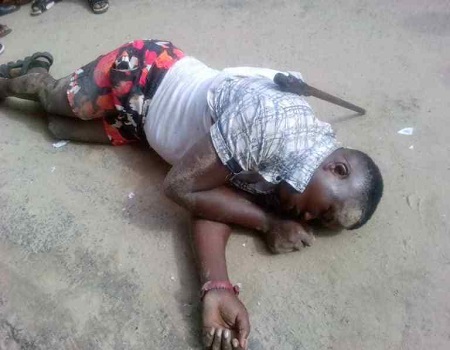 A gun duel between armed robbery suspects and members of a vigilante group has left two suspects dead and one escaping into the woods.

The incident happened about 2:30 a.m on Monday, it was gathered.

They were said to be unrelenting in their operation when members of the vigilance group in the area, on a tip-off, engaged the hoodlums in a fierce gun battle.

According to BigPen Online, the suspects were believed to be members of a cult group known as ‘Spalie,’ alleged to have been terrorizing the community.

It was gathered that they had successfully broken into the residence of one Newborn Ohamuedo where they stole two phones and N15, 000 cash.

But while on their way to break into another residential apartment, the vigilance members engaged them in a gun fuel, killing two at Erekpe Street near the mast of a popular service provider while one escaped.

The fleeing suspect, who’s reportedly the gang leader and who is currently being trailed by operatives of the vigilance group, was identified as Okpako.

A locally-made pistol and charms were allegedly recovered from the felled robbers after a search on them.

Delta State Commissioner of Police, Mr Adeyinka Adeleke, said he was yet to be briefed.