For a brighter economic future, empower women to trade

Features
By Olusegun Awolowo and Arancha González On Jul 13, 2016 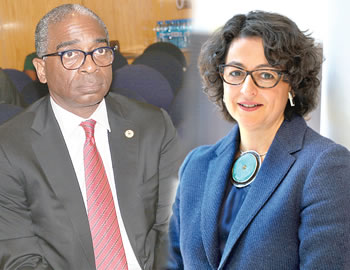 THESE are challenging times for the Nigerian economy. After a decade of solid growth, output shrank earlier this year, mostly on the back of a steep fall in oil prices.

But Nigeria’s most important commodity has never been its oil. The country’s most important asset is its dynamic, entrepreneurial, and innovative people. And one of its most underutilised assets is the economic potential of Nigerian women.

This latest bout of commodity price volatility underscores the need to boost diversification and productivity to generate lasting growth and jobs for Nigeria’s fast-growing, young population.

Beyond generating foreign exchange, trade can play an important role in shifting people and resources out of subsistence agriculture and informal self-employment into more productive activities, in agro-industry, manufacturing, and formal services. For this reason, the Nigerian Export Promotion Council (NEPC) was set up to promote the development of a diversified export sector.

Small and medium-sized enterprises (SMEs) account for the vast majority of firms and jobs just about everywhere, and Nigeria is no exception.

For growth and trade to lead to poverty reduction, it’s essential for these smaller businesses to share in the gains. The International Trade Centre, a joint agency of the World Trade Organisation and the United Nations, is working together with Nigerian private sector firms and public sector stakeholders including the NEPC to empower Nigerian SMEs to become more competitive and connect to international trade and investment.

As it seeks to diversify its economy, Nigeria must invest in its people and the SMEs that employ most of them. But the returns on these investments would be much higher if accompanied by specific efforts to bring women more fully into the country’s economic mainstream.

Nigerian women are already playing leading roles in politics and the economy. Women own an estimated 30 per cent of the country’s registered entrepreneurial businesses, and are behind 41 per cent of business start-ups. Yet a mere 6 per cent of parliamentarians are female, and women account for only 24 per cent of non-agricultural employment.

The cost of gender discrimination to world economy is staggering. McKinsey Global Institute recently estimated that raising women’s wages and labour force participation to match those of men would boost global output by more than 25 percent – like adding a new United States and China to the world economy. This is why the global economic potential of women has been likened to a ‘third billion’ poised to join India and China in transforming the global economy.

For businesses, too, greater gender equality translates to better performance. The Peterson Institute for International Economics surveyed 22,000 companies around the world, and found that having more women on corporate boards and in leadership positions is associated with higher profitability.

Some of the biggest consequences of women’s economic empowerment are felt far away from corporate boardrooms, in the poorest households and communities. When women are paid for their work, and have control over how the money gets spent, they invest much more of their income than men do in their families’ education and health.  The positive effects endure for generations.

Gender-based discrimination, for countries, companies, and societies alike, it is simply unaffordable: ‘economic malpractice’ on a grand scale. This is why ITC and NEPC place special emphasis on empowering women-led businesses – such as a shea butter cooperative in Oyo state – connect to international markets.

It’s also why the Ministry of Industry, Trade and Investment, NEPC and ITC are teaming up to host the Women in Export Stakeholders Forum and Exhibition in Abuja on 13 July. The gathering will bring together policymakers, the private sector, and representatives of women-owned businesses to catalyse ongoing efforts to empower women to drive trade-led development in Nigeria. On this occasion Nigeria will unveil national commitment underITC’s “SheTrades” initiative seeking to connect one million women entrepreneurs to market by 2020 worldwide. Participants in Abuja will share experiences about what has worked and what hasn’t – to connect women-owned businesses to markets. They will look at how businesses have taken concrete steps to expand sourcing from women-owned business, to improve women’s access to finance, and to help women entrepreneurs overcome supply-side constraints. And they will come up with concrete suggestions for how to do even better.

Last September, the United Nations adopted the Global Goals on Sustainable Development. This ambitious agenda aims to eliminate extreme poverty and achieve gender equality in education and work by 2030. Either goal cannot be attained without the other. And neither can happen without Africa’s biggest economy. ITC and the NEPC look forward to working together to empower women to trade for a better future – for Nigeria, for Africa, and for the world.

Kogi: Not dwelling in the past

We are not enemies of Nigeria —Ijaw community leader