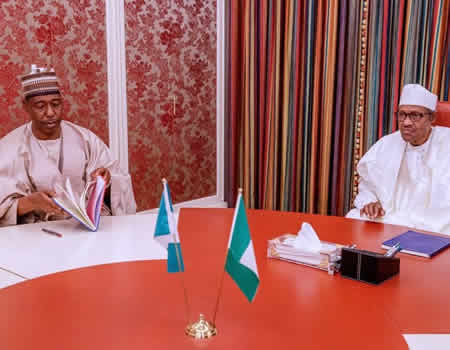 Speaking to State House correspondents after a closed-door meeting with the president, Zulum stressed on the need to re-evaluate the nation’s security architecture in order to make it more efficient and effective.

The governor, who saluted the efforts of the security personnel in tackling the activities of Boko Haram insurgents, enjoined them to redouble their efforts in bringing the menace to an end.

He said: “The discussion that I had with the President shows that we are getting to an end very soon and I am optimistic that we shall get enough support.

“Right now, we are receiving a lot of support but we are also appealing that the system be strengthened, to look into the porosity of the system and evaluate the system with a view to enhancing it,” he said.

According to him, solution is in sight for the Boko Haram insurgency troubling the North-East zone of the country

Zulum expressed sympathy to citizens of the state affected by recent attacks by the insurgents, saying normalcy had been restored to villages attacked by the insurgents in Gubio and Magumeri local government areas.

He said the civilian Joint Task Force (CJTF) in the state would be strengthened to enhance their capacity, as the CJTF was critical to ending insurgency in the State.

The Boko Haram terrorists on Wednesday attacked villages in Gubio and Magumeri Local Government Areas of Borno State where they destroyed public buildings, religious places and the houses of political office holders.

News Agency of Nigeria (NAN) reliably leant that the insurgents gained entry into the two local government areas unchallenged as the security personnel and members of the Civilian Joint Task Force were believed to have fled to nearby bushes to take cover.