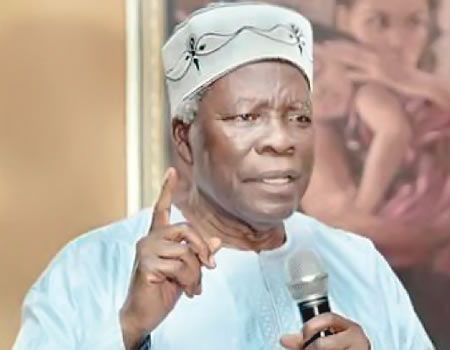 Foremost historian, Prof. Banji Akintoye; former Vice-Chancellor of UNIBEN, Prof. Emmanuel Chukwuedo Nwanze; Chief Executive of the South African Truth and Reconciliation Commission, Dr. Biki S. V. Minyuku, among others will feature as key speakers and participants Igbo and Yoruba nationalities, the two biggest ethnic groups in Southern Nigeria, have scheduled to hold, for the first time in recent memory, a meeting to address the troubled relationship between duo.

A socio-political movement, Fatherland Group, which is hosting the parley, made this disclosure on Monday in a release issued by its convener, Mr. Dele Ogun, a London-based corporate lawyer and historian, saying the meeting, which is to be chaired by Jo Wealleans, would hold on January 15, 2020.

Fatherland Group, according to the release, is a leading global socio-political movement with its headquarters in London, United Kingdom, that continues to draw the best of professionals from across Nigeria and the Diaspora.

The group convener, Ogun, said the historic meeting themed: “Yoruba and Igbo speaking with one voice from a shared experience: Wetie to Biafra,” will hold on the scheduled date, “being the anniversary of the day Nigeria witnessed her first military coup, led by Major Kaduna Nzeogwu and other radical soldiers with the stated objective of cleansing a rotten political system.

“The coup went awry after being hijacked by reactionary soldiers, an event that led to the counter-coup of 29 May 1966, political instability and then a civil war that lasted for 30 months. The war and its aftermath continue to dominate bitter debate between Igbo and Yoruba people with each trading blame. Opportunist politicians have, over the years, exploited the rivalry with a selfish harvest of parochial political fortunes, to the dismay and detriment of millions of Yoruba and Igbo people who are naturally blood bound by circumstances of faith and commerce even in the midst of the bitter rivalry,” the group sadly recalled.

According to Ogun, the summit being organized by Fatherland Group, is intended to find common ground, in the face of mounting common challenges occasioned by instability and existential threats to the lives of millions of Nigerians, declaring that the summit would open a new chapter in Yoruba-Igbo relationship.

The convener posited that this was a first step towards building a new constructive relationship between generations of Igbo and Yoruba people, who he said had been divided by hostile narratives.

He said such narratives had sown seeds of discord since the beginning of the campaign for the country’s independence in “which the two great civilisations played the leading roles but in which both have been poorly served.”

Other participants at the zoom event, according to the release, include: Timothy Modu Jnr.; Executive Director, Journalists for Democratic Rights (JODER), Mr. Adewale Adeoye, among others, while post-Conference entertainment is to be provided by the Igbo Songstress, Amarachi Attamah and the master, Yoruba Talking Drummer, Ayan De First – Mr. Culture.