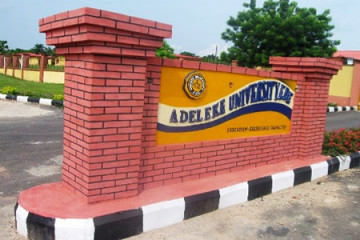 The Management of Adeleke University, Ede, Osun State, on Tuesday, launched an appeal to seek individuals with damaged liver case to volunteer themselves for the trial of a drug which has potential of curing their aliment.

The Vice Chancellor of the university, Professor Oluwole Amusan, stated this at a press briefing  to herald the activities lined up for the second convocation ceremony of the institution.

The Timi of Ede, Oba Munirudeen Lawal; Enoch Dare; Ibekwe Egbuta; Mr. Adewale Adeeyo and Chief ( Mrs.) Modupe Adeleke-Sanni, among other prominent individuals will be conferred with honourary degree of the university during the convocation.

According to Amusan,  “we will continue to encourage and support research relevant to our nation. I will just give two examples of our recent breakthroughs which can be of great use in our country.

First is the antioxidant and hepatoprotective potentials of lemon juice and sorghum mixture against paracetamol-induced liver damage in rat.

“In drug development, drugs are first given to lower animals like mice and later it will be given to animals like chimpanzees. The last set to be given will be human beings. This mixture is effective against liver damage in rats,” he remarked.