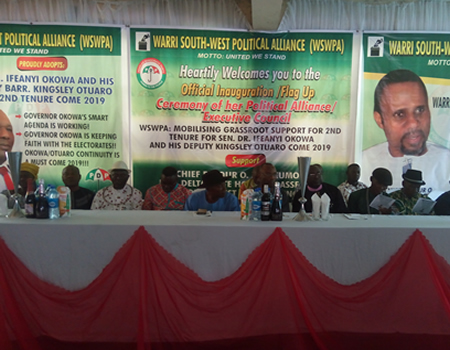 Ijaws and Itsekiris in Warri South West Local Government Area of Delta State, on Saturday, gathered in Warri to drum support for Governor Ifeanyi Okowa and his deputy, Kingsley Otuaro to be re-elected into office come 2019.

The Ijaws and Itsekiris, under the aegis of Warri South West Political Group (WSWPA), said their support for the duo was premised on massive state projects completed and ongoing in the local government as against what was obtainable in the past.

Coordinator of the executive members of the group, which was inaugurated on Saturday, Mr Solomon Eyione, said the construction of Axial Road at Okerenkoko, Oporoza, Ogidigben and Kokodiagbene Secondary School Hostel, which are near completion, had endeared the governor to the riverine people.

Mr Eyione added that the commissioner representing the Ijaw ethnic nationality in DESOPADEC, Chief Favour Izuokumor, has been endorsed to vie for the House, of Assembly ticket under the PDP having empowered the people of Ijansa community with sand filling, construction of four bedroom bungalow at Okerenkoko and supply of W23 speed boats with 200HP Yamaha engines to Batan community, among others.

The group stated that in spite of the paucity of funds due to economic recession since 2015, Governor Okowa and his deputy had lived above board, executing laudable projects across the state.

It urged residents of Warri South West to queue behind Okowa/Otuaro and Chief Izuokumor for governorship and House of Assembly positions come 2019 to ensure continuity of the provision of social amenities in the area.

Open rearing, herding of cattle to be banned in Oyo