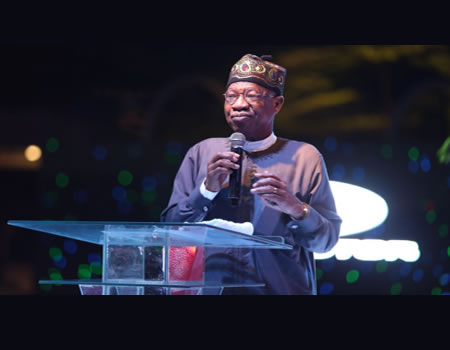 The Minister of Information and Culture, Alhaji Lai Mohammed announced on Friday in Jos that the revived Zuma Film Festival will hold in Abuja in December.

The minister disclosed this when he paid a courtesy visit to the Plateau Governor, Simon Lalong.

The News Agency of Nigeria (NAN) reports the minister is in Jos, the Plateau capital to attend the Extraordinary Meeting of the National Council on Information.

Mohammed called on the governor and his colleagues from other states to lend full support to the revived festival.

NAN reports that Zuma Festival, a foremost platform for the celebration of motion picture, was last held in 2014, with the theme; “Nationalism and Patriotism’’.

The minister also disclosed that the Ngeria Film Corporation (NFC) was partnering with the Plateau Government and Nollywood Nigeria International to establish the concept of Nigerian Film Parliament.

He said the partnership would also give birth to the rock of fame arena and the rock of
fame awards.

According to him, the projects will further consolidate the state’s arranging as the preeminent film and tourism destination.

The minister appealed to the State Government to complete the construction of the access road
to the NFC’s permanent site.

He also appealed for the erection of perimeter fencing of the Corporation’s permanent site and the settling of the issues of compensation to the
community.

Mohammed congratulated the First Lady of Plateau, Mrs Regina Lalong, for the honour recently bestowed on her by NFC, by naming the Female Hostel of the National Film Institute after her.

He appreciated the kind gesture of the First Lady who promised to build more female hostels for the Institute.

Mohammed also updated his host on the efforts by his ministry to boost the Creative Industry in view of its importance to the film and tourism sectors.

The governor, who was represented by his Deputy, Prof. Sonny Tyoden commended the minister for his passion and commitment to developing the culture, creative and information sectors.

He said the theme of the Extraordinary Meeting of the National Council on Information, which centred on Hate Speeches and Fake News were apt.

The governor restated the commitment of the State to continue to support NFC.

He called on the minister to implement the Memorandum of Understanding (MoU) between NFC and the state at inception to the effect that some management position in the corporation should be reserved for indigenes of the state.

6 Nigerians for UK Houses of Parliament debate on global issues