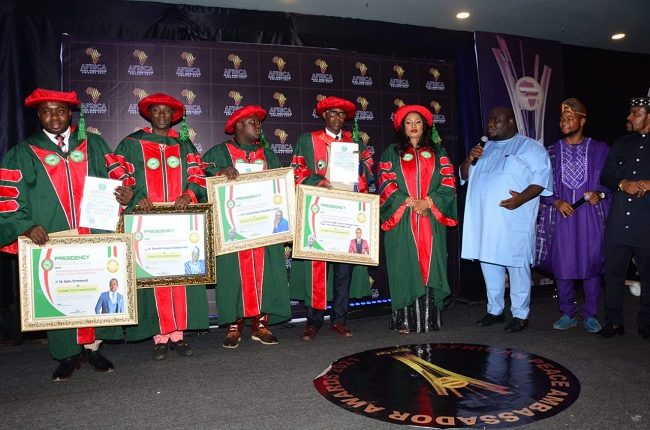 The wife of the Governor of Borno, Dr Falmata Zulum, president Alliance of Yoruba youths worldwide, Dr Akande Kazeem, Ambassador of the state of Palestine to Nigeria, Ahmed Elkachahchi others on Sunday night received the 2021 African Peace Ambassador Awards.

The African Peace Ambassador Awards 2021 which was held at Sheraton Hotel, Abuja was organised by Distinguished Peace Medal Agency.

Receiving the award, Akande who is also the founder of Akande Tunde Movement, stated that he felt honoured with the award and would challenge him towards doing more to be awarded the African Peace Ambassador Award.

While he appreciated the organisers for the award, according to him it will encourage him in  preaching  peace more  to the people

Also speaking at the event, Fatima Zulum also expresses her gratitude to the Organisers for the honour.

She said, “Awards and recognition like this is another way of celebrating the works we do. I hereby dedicate this award to all vulnerable women and children of Borno in particular and Africa in general.”

Zulum who was represented by the President and Founder of Amina Dikwa Foundation, Dr Amina Mohammed Dikwa

Speaking, Elkachachi, while receiving his award assure the organisers/convener and Nigeria that his hands were always open for the promotion of peace.

Also speaking, Dr Chris Odey, the Convener of the African Peace Ambassador Awards said: ”We are calling on the young ones to push this agenda of peace by uniting and knowing that it is their rights to rule, own the position and speak the truth always.

”I urge Nigerian youths to come together and showcase peace in their thoughts, words and actions.

“This is an annual award event. We charge the recipients to preach, build and communicate peace in their homes offices, community and states.

”By so doing that, peace would circulate the whole of Africa. It is a gradual process and we would get there. We want them to get this mentality of peaceful community, nation and continent,” Odey stressed.

The event brought together stakeholders from Nigeria and other countries including the Republic of Benin and  Ghana.

‘Why I’m glad I became a cassava seed entrepreneur’

Osinbajo wants debt relief for Nigeria, others at WEF