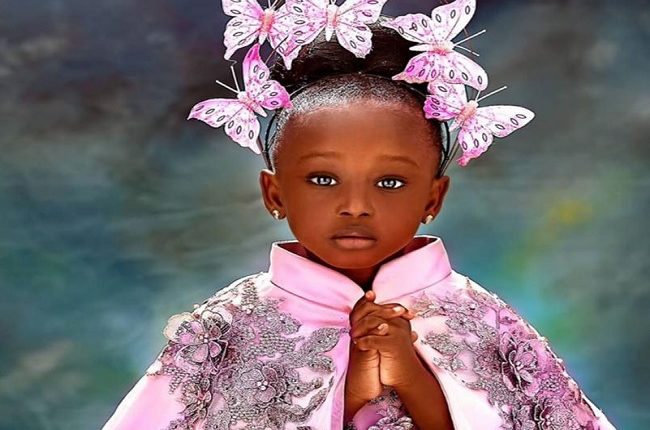 Zeenat Adebayo, the Instagram sensation daughter of celebrity couple, Issa and Happiness Adebayo is set to launch a clothing line on her fourth birthday on October 10, 2020.

Zeenat, who is the first child of the Adebayos was born on October 10, 2016 at Allen Avenue, Ikeja, Lagos, Nigeria.

Her Instagram page named @zeena_zara which dubbed her as an entrepreneur has over 300 thousand followers.

Zeenat probably derived her huge Instagram followership from her parents who are celebrities in their own rights. Her mother, Happiness Adebayo, is popular as a number one and biggest human hair seller in Nigeria and Chief Executive Officer of Glee Luxury Hair and Skincare. She has well over three thousand followers

The father on the other hand is one of Nigeria’s leading automobile dealers and business moguls, Issa Adebayo of Still Autos Limited and Chief Executive Officer of Adebayo Group of Companies. His followers on Instagram tops well over 800 thousand.

FG Increases Hate Speech Fine From N500,000 To N5m
THE Federal Government has announced that its newly- unveiled reviewed Nigeria Broadcasting Code has provisions to increase the hate speech fine for people found culpable of hate speech from N500,000 to N5 million. This is as it said the amendment of the broadcasting code is boosting local content, among other provisions…Zeenat Adebayo

Another Alleged N6.2bn Palliative Fraud Hits NDDC •Official Petitions Senate, Demands Dissolution Of IMC
FEW weeks after the nation was treated to mindboggling revelations of misappropriation of N1.5 billion by the Interim Management Committee (IMC) of the Niger Delta Development Commission (NDDC), the Federal Government intervention agency is in the news again over alleged embezzlement of N6.2 billion approved for palliative by President Muhammadu Buhari…Zeenat Adebayo

Chinese Loans: $400m Project Abandoned After Completion
THE National Public Security Communication System project for which Nigeria took a $399.5million from China and has paid $76.83million as part of the principal as well as $84.92million interest has been abandoned, Nigerian Tribune can authoritatively report…Zeenat Adebayo

China’s Greek Gift To Nigeria
A report in a British tabloid in December 2006 indicated that Britain paid the final payment on a multi-billion-dollar loan it obtained in 1945 for rehabilitation, reconstruction of its infrastructure after the devastating the Second World War. According to the report, its creditors were the United States and Canada, which Britain transferred £43 million and £12 million respectively. The original loan of $4.34bn which was equivalent to £27bn as of 2006, was drawn to prevent Britain from falling into bankruptcy due to aggravated and colossal damage caused by…Zeenat Adebayo