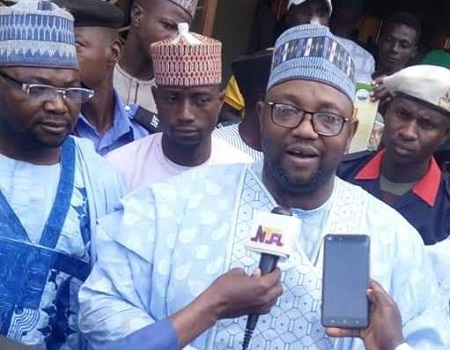 The Governorship Candidate of the All Progressives Grand Alliance (APGA) Alhaji Sani Shinkafi, in Zamfara State has described as mockery of the judiciary and national disgrace the decision by former governor Abdulaziz Yari, to challenge the Supreme Court judgment, which voided the candidature of Muktar Idris of the All Progressives Congress (APC) in the 2019 gubernatorial election.

According to a statement issued in Abuja on Saturday by Alhaji Sani Shinkafi, the APGA governorship candidate in the election, the Supreme Court cannot sit on appeal against its own decisions especially when such appeal has no ground by the apex court’s standard.

The statement observed that the Yari faction of the APC in Zamfara State had gone to the apex court on three occasions with the same result, noting that their insistence that the Supreme Court hears their petition for a third time was ridiculous and childish.

Shinkafi, who is also the secretary of the Board of Trustees (BoT) of APGA, recalled in the statement that the “Yari faction of All Progressives Congress (APC) in Zamfara State expressed strong opposition to the 24th May 2019 Supreme Court judgment and desperately proceeded to file an application for judicial review marked SC/377/2019. Insisting that they did nothing wrong to be barred for contesting in the elections.

“However in a unanimous ruling by the Supreme Court on Monday 22nd July 2019 a five-member panel led by Justice Bode Rhodes Vivor said the application lacked merit and should never have been filed.

“The Supreme Court held that it has no jurisdiction over the matter because anything that has to do with pre-election matter must be brought within 60days after a decision had been delivered. ”

ALSO READ: Nigerians should be prepared to pay more for electricity — TCN boss

The APGA Guber candidate alleged that Yari went back to the Supreme Court because of his desire “to remain in the corridors of power,” adding: “he decided to recycle the suit and filed another application for the second time at the Supreme Court for a judicial review application in November 2019, seeking for the Supreme Court to review the judgment of 24th May 2019 that voided the elections of APC candidates for 2019 General election in Zamfara State.

“This total disregard for the letters of 1999 constitution of the Federal of Nigeria by Abdulaziz Yari APC faction has opened the doors for a plethora of cases to be brought back to the apex court for judicial review.”

According to Shinkafi “the action of Yari has encouraged Hon Emeka Ihedioha whose election was voided and sacked by Supreme Court on 14th January 2020 as he has filed an application seeking for a review of Supreme Court Judgement, Chief David Lyon APC Bayelsa Governorship Candidate is also challenging the Supreme Court judgment of 13th February 2020. and Engr Abba Kabiru Yusuf PDP Kano State Governorship Candidate is planning to file an application to seek a judicial review of the Supreme court judgment of 20th January 2020.

“This is unconstitutional and it will, therefore, create a situation where there is no end to litigation in courts in Nigeria. This will make a mockery of our hard-earned democracy and National disgrace,” he said while also citing the intention of Bayelsa state APC to head to the same court over the voiding of the election of David Lyon following questionable credentials filed by his running mate, Biobarakuma Degi-Eremienyo.

Shinkafi stressed: “However, in both the cases of the APC in Zamfara and Bayelsa States the question here should be who is actually to be blamed? This is a self-inflicted injury as the party in both cases failed to either conduct a valid primary or field qualified candidates for the polls. Without mincing words, the Supreme Court in both cases made accurate findings as the blame lies with the party leadership as it had failed in its duties of providing qualified candidates for the elections.”

While noting that the APC flouted the provisions of the constitution in the conduct of its primaries, Shinkafi stated: “It is when the Supreme Court now does its job by enforcing the compliance with the instruments that politicians commence their shenanigans.

“As conventional with our people, particularly politicians, they search for where to deposit the blame. It is never in their character to be humble enough to admit their faults.

“The party itself will continue to be weak until it collapses except the rule of law is respected. A party is a conglomeration of people and not the exclusive preserve of one man or a few. It is in order to eliminate conflicts and build an enduring institution that the constitution exists. No act or omission must be taken outside the confines of the constitution.”

Shinkafi maintained that the national leadership of the APC must take the blame for the party’s misfortune and accept it in good faith.