•‘My son stopped drinking, smoking, began to give me happiness, then he was murdered’ 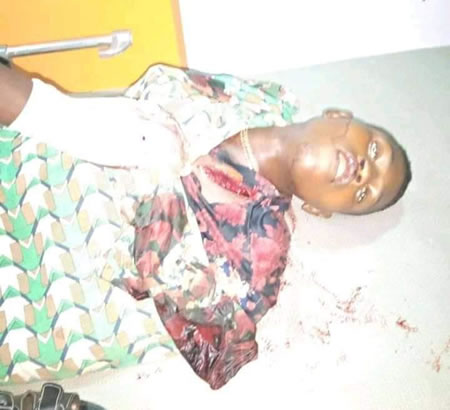 THE Gundis family of Dass in Dass Local Government Area of Bauchi State will never forget Friday, 29 May, 2020. This was the day life was snuffed out of their 19-year-old son, Zaloti, during a fight reportedly over a girl.

Zaloti’s father, 65 years old John Gundis, spoke to Saturday Tribune at his two-room residence about his grief. He said he was yet to come to terms with the reality that he will never see his son again. “I have been denied the joy of seeing my son grow to become something in life,” he groaned.

The bereaved father said: “Zaloti was our last born. He finished secondary school in 2019 and was still struggling to further his education when his life was cruelly cut short. They shattered his dreams and left us in everlasting agony.”

Mr Gundis, a civil servant with the Bauchi State Water Board, said: “Although my son was stubborn, we all loved him and cared about him. We continued praying for him to return to being a good boy. He had been influenced by peer groups to veer off the path of goodness and engage in activities that did not reflect well on him.”

He said the late Zaloti had caused the family a lot of sadness and anguish because of the criminal activities which he and his gang engaged in at various places within and outside Dass. According to him, Zaloti was once remanded in prison for 10 days for jumping bail after he was arraigned for an offence. The man noted, however, that one thing gladdened his heart: his son, shortly before his murder, had begun to retrace his steps. He said this was very much to the surprise of everyone in the family.

He said: “One day, after Easter in April, Zaloti woke me and his mother up and started crying. He said he knew that he had caused us a lot of unhappiness with his lifestyle but now he had realised his mistakes and he wanted us to forgive and pray for him so that he could have peace of mind. I told him that that was what we wanted from him. I said we wanted him to be a good boy; that as the last-born of the family, he was expected to enjoy special care from everyone. His mother and I then prayed for him. Since then, we noticed positive changes about him: he no longer went out unnecessarily; he began to go to church; he no longer drank alcohol or any other intoxicant; there was no more smoking for him. He brought back joy and happiness in the family.

“He went to our pastor for confession and prayers. He joined the youth group and became constantly engaged in church activities. He even posted on his Facebook wall that he was no longer a criminal but a man of God. We were enjoying a good time with our son before that fateful day when he was murdered by one of his friends.”

On what led to the incident, the bereaved father man said: “I am still at a loss because no one has been able to tell me what actually happened. Some people said he and his friend fought over a girl but no one has told me who the girl is. What I know is that there is something behind his killing and that is what I want to know.

“On that fateful Friday, he went out in the morning and at about 12.00 p.m., he came back home, went to the borehole to fetch water before getting ready to go to church for youth fellowship. After taking his bath, he told me that his friend called and he wanted to go and see him before proceeding to church for the youth programme. The next thing I heard was that he was stabbed in the neck with a knife by the friend. I want justice for my son. I want to know what actually led to his murder. I want his case to serve as a lesson to my other children. I buried him on Monday. I don’t want to bury another child. “

Zaloti’s mother, Mrs Saratu Gundis, said apart from wanting to see justice done in the matter, she would continue to ask God to touch the life of the person that killed her son. She said: “I want God to touch his heart so that he can use his life for good things.”

The deceased’s immediate elder sister, who is referred to simply as PA, said she was very close to her late brother, particularly after he became born-again. “We were always together at home. We always went to church together for fellowship. He was leading a completely new life. It was as if he knew he was going to die soon,” she said.

Zaloti’s 21-year-old friend, simply called Ishaku, was alleged to have killed him during an argument over who between them was truly the boyfriend of a yet-be-identified girl.

Saturday Tribune learnt that the incident happened in the Kanwara area of Dass, near a drinking joint. A source said: On the fateful day, I saw Zaloti going up and down between 10.00 a.m. and 11.00 a.m. in my area chatting with people as if he had premonition of his death.”

The source, who said that he was related to the suspected killer, disclosed that he was at home on the evening of the fateful day when, at about 5.30 p.m., he received the news of the death of Zaloti during a fight at the joint. He said he gathered that Zaloti was stabbed in three places on his body by the assailant during an argument over who was the real boyfriend of the girl.

He, however, said the fight was not on a girl people actually knew to be the late Zaloti’s girlfriend because she had not been seen in town for a while.

The Bauchi State police command confirmed the incident through its Public Relations Officer, DSP Ahmed Wakili. The police spokesman said a case of culpable homicide was reported from Dass Police Division and transferred to the SIIB for further investigation.

Wakili said the victim was stabbed in the neck with a sharp object and was rushed to Dass General Hospital where he was confirmed dead. He said the police had arrested one suspect in connection with the case, while they were still working to ascertain the immediate and remote cause of the murder.

No one is in charge of Nigeria — Soyinka