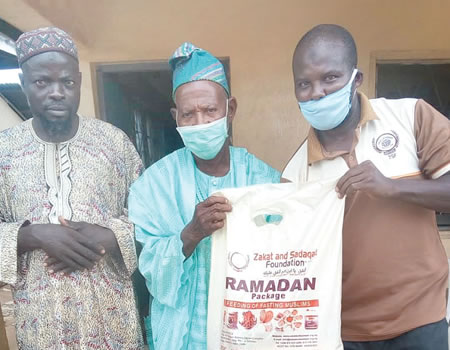 THE Zakat and Sadaqat Foundation, Oyo State chapter, has identified with Muslims in this month of Ramadan through distribution of food items to individuals and households across the state.

The distribution ceremony took place in the three senatorial districts of the state with welfare packages to over 250 households.

The coordinator of the charity organisation in the state, Dr Nafiu Musa, said the gesture was meant to provide support for the beneficiaries and to cushion the effects of the hardships occasioned by the outbreak of coronavirus in the country.

According to Dr Musa, the gesture also represents one of the cardinal objectives of the foundation in taking care of the underprivileged in the society.

He stated that the foundation believed that private individuals and corporate bodies must continuously assist the government in making life better for the citizens, which informed the decision of the organisation to regularly provide assistance to the needy.

Musa said the foundation was poised to expand its operations to be able to reach out to more people in the society.

He commended staff members of the organisation for their efforts to get the package to the target households, especially in remote towns and villages.

Also, the foundation distributed packages to widows and orphans across the state with a view to ensuring that they have a memorable Ramadan.

The beneficiaries expressed appreciation to the foundation for its concern and promised to make the most of the packages.

How organisation showed love to people living with disabilities