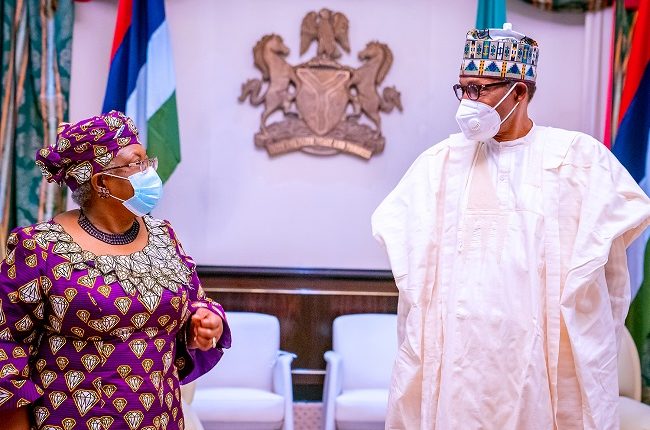 President Muhammadu Buhari, on Monday, told Dr Ngozi Okonjo-Iweala, newly appointed Director-General of the World Trade Organization (WTO), that despite the robust support Nigeria gave to her candidacy for the position, she merited her appointment.

Speaking when he hosted her at the presidential villa, Abuja, he said: “You also earned it. We are happy you made it, but you earned it with your record of performance both at home and abroad.”

The President said Dr Okonjo-Iweala was putting Nigeria more on the world map, saying, “and I congratulate you, as well as the country. I know you will represent us so well.”

President Buhari lauded Nigerian women once again, pointing to key positions they hold like Minister of Finance, Budget and National Planning, Head of the Civil Service of the Federation, and many others.

He said the same way, the government would encourage the youths, “so that they can be ready for the challenges of the future.”

The new WTO DG thanked President Buhari for the pulsating support she received from her own country in the race for the position.

“You nominated me, you wrote hundreds of letters, called up hundreds of world leaders. Without your personal and direct intervention, it may not have worked. The people of Nigeria also supported me massively. The youths were wonderful, always encouraging, backing me up on social media.

“Mr President, the world recognizes what you have done. Since its establishment, only men have led the WTO. Now, a woman has emerged for the first time, and she’s a Nigerian. We are so honoured,” Dr Okonjo-Iweala said.

She apprised the President of the opportunities for Nigeria in the global organization, as well as the challenges, stressing that “WTO will do more to help Nigeria, but we need to add value to our products in order to trade more. We should exploit all the opportunities in front of us.”

She added that the support and leadership of President Buhari will help her a lot in her position as DG.

Addressing a press conference after the meeting, the WTO DG allayed fears that embracing the free trade policy of the world body would harm Nigeria’s economic diversification drive.

She affirmed that special and differential treatment could be applied to prevent vulnerable countries from collapsing under completion.

However, she added that the special treatment would not be forever as such countries would have to eventually open up for competition.

She said: “Some of the economies in the world, especially the small vulnerable and island economies who are not able to produce products need free trade because they import a lot of what they need.

“What would happen to them if they were no free trade because these are small islands or vulnerable? They can’t grow much.

“So, there are some economies in the world that strive or cannot strive without free trade. There are others like Nigeria that have the ability to produce and manufacture their own products.

“And of course, there are provisions if you need a period of time to be able to manufacture and produce, there are certain principles, special and differential treatment. That’s what it is called at the WTO that you can join. This allows the developing country to have a long time period to implement some of the WTO agreements. Giving it a chance to develop what it is called policy space to be able to develop whatever industrial manufacturing wants to develop.

“Of course, this is not forever because eventually, you need to open it up to the competition. Otherwise, you’ll be developing inefficient industries. But there is that provision that is there for the developing countries to have access to that.”

The former Nigerian Minister of Finance and Coordinating Minister for the Economy, also said duties could be applied on imports to prevent the country from being a dumping ground.

Okonjo-Iweala conceded that despite lifting millions out of poverty, free trade has not been beneficial to all especially women, saying that in recognition of this, the WTO has a deliberate policy to support women to enter the value chain.

“Free trade has lifted hundreds of millions of people out of poverty, but it has also left some people behind. So, there’s no doubt that there is inequality, not everybody has been lifted up,” she said.

She said she had discussions in many areas with President Buhari on how the WTO could do not improve the Nigerian economy.

According to her, there is a unique opportunity for the country to improve its standing in trade and add value to its products especially agriculture.

While noting that Nigeria’s shea butter was denied access to the United States and European markets because of poor quality, she said the country could “trade more, export more and add value to its products.”

The DG noted that Nigeria must out-market others, stressing that there is a high demand for the country’s fashion in other African countries but it has not been able to leverage on it.

On COVID-19, the former minister advised the country to set up local vaccine manufacturing as she noted that coronavirus would not be the last pandemic.

The British Parliament at the Westminster Hall held a debate on ‘e-petition 554150, relating to Nigeria and the sanctions regime’ on Monday. The government of the United Kingdom has however responded…Your appointment is well earned

How SARS used me to lure, torture my friend, witness tells NHRC panel