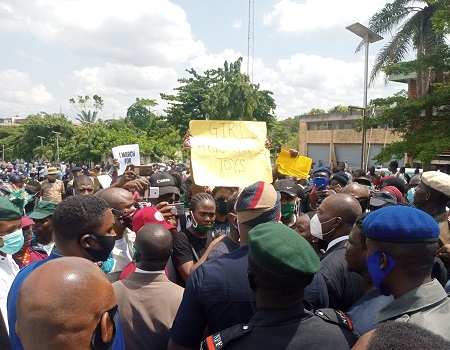 Young Nigerians took to the streets of Ibadan, the Oyo state capital, on Monday, in protest against recurring incidences of killing, rape and other sexual violence against women in the country.

The protest spearheaded by the state chapter of National Association of Nigerian Students (NANS), National Youth Council of Nigeria and some youth coalition groups saw many youths clothed in black attires loud in their calls for implementation of stiffer penalties against rapists.

For at least three hours, entry and exit into the State Secretariat was on lockdown as some of the protesters insisted on having the State Commissioner for Women Affairs and Social Inclusion, Mrs Faosat Sanni to address them.

In his address at State Secretariat, the NANS President, Daniel Akpan, advocated the enactment of laws that stipulate capital punishment for rapists, imploring Governor Seyi Makinde to ensure that the perpetrators are made to face the full wrath of the law.

Akpan thereafter presented a position paper, addressed to the governor, on incessant cases of rape and killings in the country.

In her own address, Chairperson, National Youth Council of Nigeria, Adebobola Agbeja, described as worrisome the upsurge in rape cases and violence in Oyo State.

Beyond having laws like imprisonment of rapists, she called for more convictions and application of stiffer penalties like capital punishment.

Addressing the protesters, Speaker of the state house of Assembly, Honourable Adebo Ogundoyin, said though the state had laws on Violence Against Women, the State Assembly was about to pass into law a specific bill dealing with rape.

Before passage of the bill into law, he said the Assembly will have a public hearing to get the inputs of all stakeholders.

He stressed the need for people, including rape victims, to speak out and embark on bold actions to make security agencies, the judiciary, legislature and executive deal with the issue of rape more vigorously.

While receiving the student leaders on behalf of Governor Seyi Makinde, the Oyo State Commissioner for Youth and Sports, Seun Fakorede, commended the students for being loud in their protest against rape and killing of women and the girl-child.

He assured that the state government was leaving no stone unturned in apprehending the perpetrators of the recent killing of Barakat Bello and Azeezat Shomuyiwa in the state.

“I can assure you that with the reception of this position by you, everything that ought to be done to make sure that we bring justice for all the people who are victims of these unfortunate incidences would definitely be done.”

“We didn’t have to wait for this before the State government moved into action. As I speak, work is going on in the House of Assembly on enacting a Law that will definitely attend to everyone that is found wanting, especially when it comes to murders or rape cases, such as this,” Fakorede said.

Nigeria’s economy to contract by 3.2% as global economy shrinks by 5.2% ― World Bank