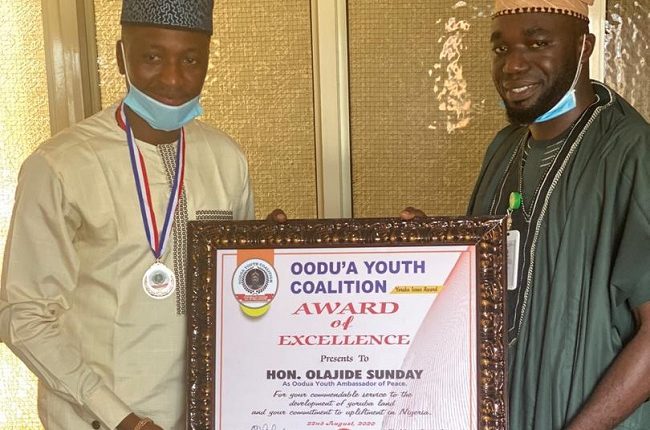 As part of ways to encourage youths in entrepreneur, the foremost Yoruba youth group, Oodua Youth Coalition(OYC), has presented an Oodua youth ambassador for peace award to Honourable Sunday Olajide for his giant strides in the business sector.

The group according to its National president, Oluyi Akintade Tayo, said the Efon-Alaye Ekiti born entrepreneur has demonstrated over the years his tenacity in giving back to the society especially the youths.

Oluyi while speaking during the presentation in Efon-Alaye Ekiti added that the group was encouraged by his selfless service and, ” humanitarian gesture at engaging the youth gainfully for productivity.”

He advised the youth in the country to take a clue from the awardee and think outside the box rather than waiting for the non-existent white-collar jobs.

OYC president urges government at all levels to provide an enabling environment for youths to thrive and display their talents towards contributing to the development of the country.

On his part, Olajide commended the group for honouring him with the award promising to continue his contributions in uplifting and supporting youths in the state and the country as a whole.