You have no reason to vote for APC, Atiku tells people with disabilities 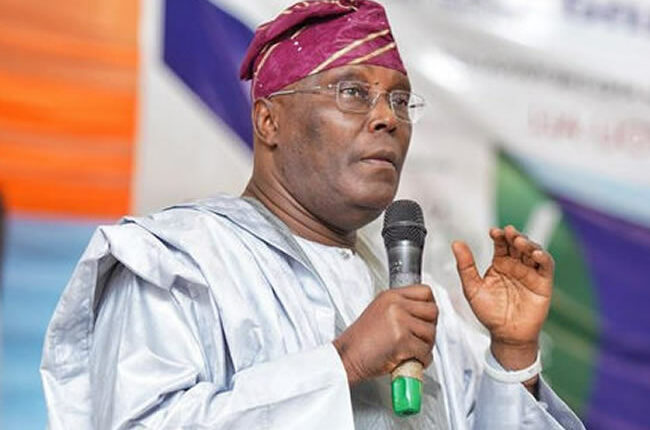 Presidential candidate of the Peoples Democratic Party (PDP), Atiku Abubakar, has told people with disabilities not to vote for the All Progressives Congress (APC) in the forthcoming presidential election.

The former vice president, who stated this while speaking at the inauguration of PDP’s People With Disabilities National Campaign Council, said the APC had failed to implement the persons with disability’s law despite the passage of the bill by the National Assembly.

According to him: “APC has refused to implement the PWD law and you have no reason to vote APC again. I really want you to identify your membership and tell them to vote for a party that has recognized you and has given them a special place which is PDP.

“Let me congratulate you on your inauguration into our presidential campaign council as well as the celebration of World Disability Day. You contribute your own quota to the economy and we in the PDP recognize you and that is why we have given you a special place in our party’s constitution and campaign council.

“Some people have said the number of persons with disability in Nigeria is 19million, 20 million or 25 million, but let’s assume you are 20 million. If we get all of you to vote for us, we don’t need others then. So really, you are important to us.”

Inaugurating the PLWD campaign council, the national chairman of the PDP, Iyorchia Ayu, said the party is inaugurating the council because the PDP understands the pain and value of PWDs.

He said: “I am happy that it is our party that is giving these special people this opportunity and if you look at our party, you will find persons with disability in top positions.

“We have a senator who is PWD, we have an NWC member who is a PWD, we have a state assembly member as well, and our governorship candidate in Niger, who by God’s grace will win the gubernatorial election. So I want you to take this opportunity seriously and ensure our victory.”

On his part, grand patron of the PLWD council, Isa Liman Kantigi, noted that Nigerians have no alternative than to go with PDP if they don’t want the country auctioned.

He said: “It is on record that PWD don’t leave polling units until they vote, and their votes count, therefore, I want to urge you all to ensure you participate fully in all campaign and mobilization programmes to ensure our candidate wins the 2023 presidential election.”

Giving his remarks, the DG of the PDP PCC, Governor Aminu Tambuwal, who was represented by the DDG of the council, Senator Liyel Imoke, noted that the PDP recovery agenda is an all inclusive agenda.

He also proposed that the D in PWD should be changed to Determination.

El-rufai has only one house in Kaduna ―​​Senator Sani