You can not succeed in proscribing ASUU, Osodeke tells FG 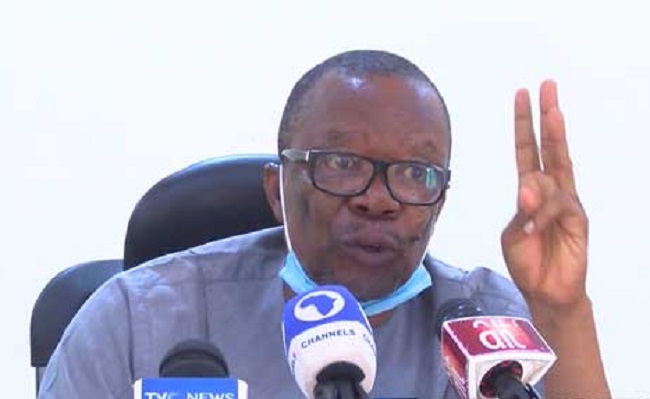 The National President of the Academic Staff Union of Universities(ASUU), Professor Emmanuel Osodeke, has said that the Federal Government can not succeed in any moves to proscribe the union.

Osodeke in his remarks on Thursday at a special commemorative programme organised by the union in honour of the immediate past Vice Chancellor of the Olabisi Onabanjo University, Ago Iwoye, Professor Ganiyu Olatunji, held at ASUU secretariat.

Osodeke noted that the union based its philosophy on the worthy cause that would move the nation’s educational systems forward with positive effects on every sector of the country.

He criticised the Minister of Labour and Productivity, Dr Chris Ngige, for his moves to proscribe the union.

“I can see why Ngige is interested in banning ASUU because once ASUU is proscribed, all the union’s assets automatically become the Federal Government’s property, even when the government is bereft of ideas to put in place, qualitative assets in the midst of sufficient funds at its disposal as done in the University of Ibadan, University of Port Harcourt, University of Maiduguri among other places.

“You will never succeed in banning ASUU because ours is a union that assesses the system and aligns with the worthy courses without being biased for the progress of the Nigerian educational society,” the ASUU president stated.

Osodeke advised Vice Chancellors in public universities to desist from turning themselves into Chief Executive Officers, saying they are just one among equals.

He said, “One thing we have gotten wrong is that in the universities, we look at the VCs as Chief Executive Officers (C.E.Os) which by the law, it is not true. A Vice-Chancellor is just one among equals and it’s only when he sees himself as one that he will not have a problem with ASUU.

“All the actions and things done by the committee set up; you are to look at those committees’ actions and agree or disagree. And when you disagree, you go back to them. Unfortunately, what we currently have in Nigeria is that over 90 per cent of our universities today are VCs, who look at themselves as C.E.Os and there is nowhere in the laws that permit a VC as C.E.O. because everything he does can be challenged.”

While former Vice Chancellor of the University of Lagos, Professor Rahman Bello, emphasized the need to grant public universities financial autonomy to be able to compete and be ranked among the best in the world.

Bello, who is the Pro-Chancellor of Tai Solarin University of Education (TASUED), Ijagun, delivered a lecture titled: “The Role of Vice Chancellor In the Evolution and Sustenance of a Viable University System.”

The University administrator faulted the federal government for establishing more universities while many of them are in a bad state as far as infrastructure and funding are concerned.

He submitted that the time had come when the universities should be allowed to run independently without being under any obligation of the core civil service rules.

“The provision of public utilities, which would have been taken for granted in other climes, is what usually gives Vice Chancellors the greatest headaches in Nigerian public universities.

“Issues involving assured and stable electricity supply, water, internet services, security and transportation, in the cities, especially, could sometimes take prominence in executing their roles. This is without mentioning the provision of adequate infrastructure commensurate for getting the core mandates effectively done. For newer universities, inadequate provision and old and decaying facilities for the relatively older ones.

“Apart from normal mandates of training, research and services, vice-chancellors are normally expected to explore novel means of generating funds for their institutions, other than fees and subvention.

“This will be so once the institutions determine their dates through financial autonomy, where they become fully in control of their funding and can plan on what is real and available,” Bello said.

The chairperson of ASUU-OOU, Dr J.A. Okewale, in his welcome address, said the union decided to honour Olatunde, “for demonstrating the spirit of comradeship as espoused in the principles of the union in his conduct and relationship with members of the University community in general and ASUU in particular.

Okewale said the immediate past VC refused to be sucked in by the temptations of office while advising other VCs to take lessons from Olatunde’s administrative style in the conduct of the affairs of their various institutions.

As tenure winds down, Aisha Buhari apologises to Nigerians

Gbajabiamila, FG not committed to offset salary arrears while on strike – Reps…