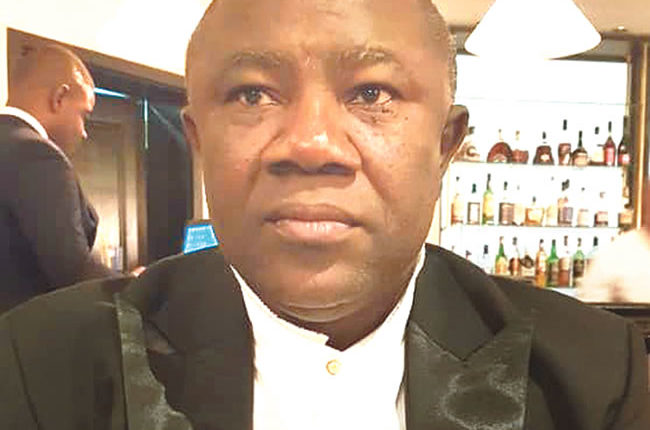 Chairman, Media and Publicity Committee of the Peoples Democratic Party (PDP) governorship candidate, Eyitayo Jegede, in the October 10 election in Ondo State, Dr. Benson Enikuomehin, speaks with HAKEEM GBADAMOSI, about the chances of Jegede and the values he represents.

HOW prepared is the Peoples Democratic Party (PDP) for the October 10 governorship election in Ondo State?

Our party, the PDP, is clear-minded that with the help of God and the support of the people, minus the shenanigans and the thuggery being perpetrated by the All Progressives Congress (APC), victory is assured. We are combing all the nooks and crannies of the state in the form of campaign for the purpose of winning the election. Our candidate, Eyitayo Jegede SAN, is not in doubt as to his winning the election and he has said it clearly that no distraction will be allowed. We are prepared and that was shown at the kick-off of our campaign when Ondo State stood still, such that it you threw up sand it would land on somebody’s head.

So we are ready. The people are ready and we also hope that INEC and the security agencies too are ready. If these things are in place and the election is free, fair and credible, like it happened in Edo State which we just witnessed, APC is not a party that can come close to us in the polls. The APC government is a goner in Ondo State.

Is it your campain promise that inspired this level of confidence?

Our candidate has come up with a seven-point agenda he called “My Offer,” meaning that he is the offeror and the people of Ondo State are the offerees. And he is saying, ‘please accept my offer on education, health etc.’ On education, he promises to make education affordable and these skyrocketing school fees that Governor Rotimi Akeredolu introduced would be reduced to the barest minimum, if not returned to where it was.

On health, he is looking at such programmes as the Mother and Child and others which we used to enjoy in Ondo State, but have been arbitrarily abandoned by this government. It will be brought back. We are also saying that the security architecture of the state will be re-jigged, such that people will sleep with their eyes closed. This is besides agricultural development to ensure food security by encouraging the younger ones to take agriculture as a vocation. He is also talking about how to empower women and the young ones, and he is saying this is my deal with you, and that all the people of Ondo State need to do about this offer is accept it by voting for me, because once you accept an offer, the deal is struck.

You will recall that I worked for Dr Eddy Olafeso in the primaries and for our candidate. For Jegede to have walked up to me that I should lead the Media and Publicity Committee of the campaign means that he has pacified a good number of us. Now, other aspirants like Senator Kunlere, Chief Sola Ebiseni, Dr Olafeso and Godday Erewa are all with us on this particular project. In fact, Erewa heads two committees in this campaign.

For now, I’m aware that Banji Okuomo has left to work for the other fellow, but if out of six aspirants, you have five remaining in the party, that is a very good score. We would have loved if he had remained, but as he has gone, others are coming in. Look, this election is not going to be based on one big name. No. Rather it is about the electorate in the villages, the fishermen, the businessmen and women and artisans. My single vote is not more than that of one tailor in Igbokoda or Akoko. It is the same vote. Therefore, we are targeting the people. For the artisans, he said he is going to raise soft loan for them to be able to finance their businesses. These sectors are very important to him and he is addressing them. We wish those who have left well and we will definitely work together with those who are [with us] and are supporting the party. You will recall that in Edo State, hundreds of the Governor Godwin Obaseki’s commissioners, special advisers resigned even shortly before the elections, but did Obaseki not win?

Having lost to the PDP in Edo State, don’t you think APC will fight tooth and nail to retain Ondo State?

We are desirous that the kind of broadcast they made in Lagos State before the Edo election will also be made about Ondo election. We expect that leaders of APC will make scathing remarks so that we can cash in on that. That aside, Ondo State is for the people of Ondo State and it is to be ruled by the people of Ondo State.  The best that APC can do to help the tenure of this expiring governor is to open the vault of the Federal Government and bring all the money. If they can bring the governor again from the North to bring in dollars to come and share, we have told our people, if they give you even $40,000 just for one vote, take the money, but go and exercise your right according to your conscience.

Therefore, they have suffered not only a technical defeat, but also a serious blow by reason of what transpired in Edo State, and that is an added advantage to us. They are a wounded lion. If a lion is wounded, all you need to do is fire him more gun shots and he will be dead. What we are doing is that we are talking to the people and engaging them. We are not arrogant about it; we are not saying it is our right; rather we are speaking with them to give us the mandate. That is why Mr. Eyitayo Jegede has said ‘I have an offer.” This is the offer I am putting on the table, on health, education, infrastructure, agriculture, security and the rest.’ And when people see a tantalising offer, they will accept it.

For instance, which woman will see a well-educated man, godly, nice, well-behaved seeking her hand in marriage and will not accept him? Jegede represents that. He is an offer that is acceptable, trustworthy and has dignity, not the one that abuses the kings, or talks flippantly.

Our people in Ondo State value culture in the way we talk and behave. That is why they call us Omoluwabi. That is what our people are looking for and Jegede possess this and more. None of the contestants can rival Jegede on that. Is it this one that gets angry on phone or talks anyhow on television? We are prepared for them; we are ready. We are not going to cause crisis, but if anybody wants to test our will, we will defend our votes.

Are you threatened by the defection of the Deputy Governor Agboola Ajayi from the party?

Ajayi is a rolling stone. He was in APC for about three and a half years, rolled into PDP for about a month, and rolled into Zenith Labour Party. A rolling stone gathers some dust and it moves, but it will not remain there forever. He has gone to ZLP and we wish him well. But we are going to win, so we are not threatened by anybody. In fact,  the more the better. When you defeat a man in a game by taking one or two points off him, that is when victory is sweet. We don’t intend to defeat a person by a margin of 400,000, no.  If we win by a margin of 50,000 or 100,000 it is okay.

A critical factor in the victory of Governor Obaseki is the support he enjoyed from other state governors. Would you say Jegede enjoys the same thing?

As of the last count, when we had our rally, the chairman of the PDP Governors’ Forum, Aminu Tambuwal, came and delivered the message of all the PDP governors. You will recall that as that time, the Edo State election was very close and the like of Governor Ifeanyi Okowa and Nyesom Wike were busy strategising for the election.

Now there is no other election in sight, but Ondo State and you will see them en masse and the support is going to be gargantuan. It is like beckoning to the people in Macedonia, ‘Come over to Ondo and help us.’ They are not coming to Ondo to vote, but definitely to give moral and logistics support.

The APC can go and gather all the people they have to the state, but I can tell you that Akeredolu is a hard sell, because there is nothing to show for the three and a half years that he has been in government. The only thing he has done is to empower his family. If there is any development, it is limited to Owo, not even in Ose Local Government, or in the northern senatorial district.

Somebody said when a child fails a class, it happened in Edo State, a governor did not do well, and they said he should be given second term, but when he got it he messed up. He was arraigned in court for fraud by the EFCC. He was saved from imprisonment by plea-bargain. So if Akeredolu has not done well, he should be voted out. There are allegations here and there. Who are they fooling? He jacked up school fees from N30,000 to N200,000 and reduced it by N10,000 a few weeks before election, what is going on? If he is re-elected, he will show the people pepper, hence we are saying no.

I’m the most qualified person for Ekiti governorship seat in 2022 —Ex-Rep, Adekola