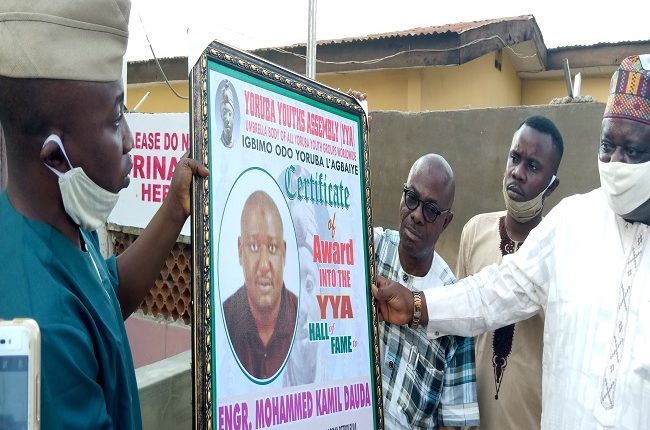 The youth of Yoruba origin have been urged to make concerted efforts to regain eroding values, focus and educational glory of their ancestral heritage.

This is just as the Yoruba youth were charged to pursue cultural reawakening and emulate self-development efforts of their past leaders towards achieving self-reliance.

Speaking during the conferment of Yoruba Youth Man of the Year on a community leader in Ilorin by a pan-Yoruba youth organization, Yoruba Youth Assembly (YYA), Igbimo Egbe Odo Yoruba Lagbaye, the founder of the Dauda Okoh Okekere Endowment Foundation, Engineer Mohammed Kamil Dauda, charged the youth to encourage honesty, sense of duty, and respect for cultural values.

“Yoruba people remain the only group in Africa with rich cultural values and tradition. It’s only in Yoruba you understand planning and what leadership entails. For instance, if you are born the same day in Yorubaland, say morning and afternoon. You’re made to know one is older; the senior and the other is the younger; the junior. But we’ve lost it. Probably with your group we might regain it with the right focus.

“I hereby charge you to continue in your drive to bring more people out from our grassroots in order for them to get noticed and embrace leadership call. But don’t let money be your motivation. Have an agenda for Yoruba and its leaders and pursue it to a logical conclusion.

“Other tribes promote their leaders. Are our youth also doing that? What’s the value addition we are making in our leadership culture? LAUTECH, Ogbomoso is embroiled in tango between Oyo and Osun states. Do we want that to linger on for the students? Our origin seems troubled. What’s the rapport among Yoruba obas? They need to blend the more. Chief Obafemi Awolowo stands tall among others with a history of his many firsts. Are we emulating him? Yoruba is at the bottom among others. We need to rise up again and be at the top,” he said.

“A lot of young people have messed up youth organizations and students’ unionism by going around big people, scouting for money, and these big people are celebrated. But we’re losing the core values doing this. Why would a poor person from poor background join politics, get into political power and own 10 houses and then celebrated? By this, we end up celebrating mediocre.

“My father, a cheerful giver, told me that one should live one’s life for others to see what comes from God for such a person. I think we should encourage that among ourselves.

“Also, a lot of people in business makes a lot of money more than those in a white-collar job, which makes them nowhere. When you are educated, you should add value by embracing entrepreneurship. Because whatever a graduate does as a vocation will be quite different when compared with those without education. Again, you don’t need to wait till government employs you, maybe with meagre salary”, he said.

Also speaking, the president of the youth organization, Hon. Olarinde Thomas said that youth constitute the most cohesive component in African society, adding that they should be fully involved in the task of societal development and consolidation of achievement being recorded in society.

“A framework should be put in place to harness the energy of the youths in the task of transforming our tribe and nation into a truly developing one. As we struggle to stabilize education, not only of certificates but o culture and discipline in Nigeria, it is wise and patriotic to invest in leaders like Engineer Mohammed Kamil Dauda,” he said.

TOUGH POLICIES: IMF, World Bank Take Over Nigeria’s Economy •More Pains Ahead For Nigerians
ALTHOUGH this seems a difficult period for Nigerians, Sunday Tribune investigations have, however, revealed that it  could actually be a signal to the beginning of more unbearable pains in the form of economic policies as the Federal  Government continues to implement the stringent conditions of its international creditors…Yoruba youth  Yoruba youth

What I See Around The Villa — Primate Ayodele
In this interview by KEHINDE OYETIMI, founder of Inri Evangelical Spiritual Church, Lagos, Primate Ayodele speaks on both global and local issues…Yoruba youth  Yoruba youth

High Cost Of Fuel, Electricity Will Ruin Our Lives — Market Leaders, Business Owners Lament
CONDEMNATION of the hike in petroleum products and electricity went notches higher at the weekend as more  Nigerians flayed the decision of the Federal Government to take such a decision not minding the fatal blow dealt the economy by the coronavirus pandemic…Yoruba youth  Yoruba youth