Yoruba will be better if we uphold truth, tradition —Oba Jayeola

Igboho, the former capital of the defunct Oyo Empire wielded both power and influence in that age. Till date, the town retains that historical tie with Oyo Alaafin. The Ona Olubode of Igboho, Oba Abdulrasheed Adetoyese Jayeola, who recently clocked 10 years on the throne, speaks with TUNDE BUSARI on the significance of the town among other issues related to Yorubaland. Excerpts: 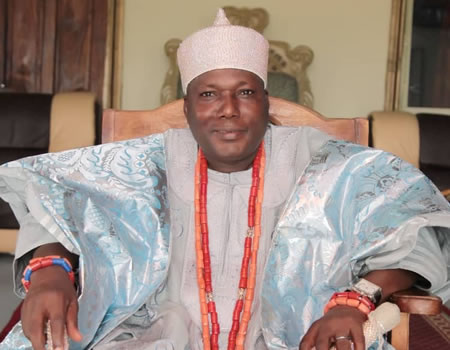 You have spent one decade on the throne. Can you describe your reign in terms of your accomplishments?

The notable accomplishment I have recorded on the throne in the past 10 years is the support of God which I enjoy on daily basis. And I am saying this with every sense of appreciating God who stands by me from my coronation to my 10th anniversary. We all know that God cannot come down to support His own. But He comes in form of human beings. The human being He sends to me is the Alaafin of Oyo, Oba Lamidi Olayiwola Adeyemi, who has stood by me like the rock of Gibraltar. I am not rich but I am comfortable. If I have something in mind to do, I would just put it before God. Before you know it, the project is done.

Can you give an instance of this?

The example is the palace, inside which we are now. You needed to be here before I came to the throne. Even when I was installed, the state of this palace was too bad. It wasn’t what a palace should look like. But I put it before God that I wanted a befitting palace, and God answered the prayer.

How did God answer the prayer?

How does God answer prayers? Don’t you believe in the power of prayer? If you believe, then you know how God answer prayer. I just told you that God will not come down but uses man to carry out his works. This must be enough to answer your question. I was blessed by people who identify with me, and the rest is what you see in this palace.

Can you recall your experience during the contest to the throne?

It was an interesting contest. I can even say that my experience is unique, in terms of my attempts at becoming the Ona Olubode.

What made it unique?

Thank you. I contested for the throne on two occasions.

On my first contest, it was sure for me to win but somehow it did not happen. I went to the Alaafin and he told me to accept it. He said if God had destined it, I would return to become the Ona Olubode or my son would make it. I accepted his advice and moved on. The installed Ona Olubode reigned for eight years and six months. There was vacancy again, and I was back in the race. Despite the fact that it was my turn, efforts were made to play a fast one. I went to Baba Alaafin and reminded him what he had told me at my previous attempt. He took me inside the palace, spoke with me and the rest is history. In fact, he personally came to Igboho for my coronation.

Why did you think he attended your coronation?

Baba Alaafin is history personified. He knows the relationship between Igboho and Oyo. So, he maintains the strong tie till date.

Truly, so much has been heard about Igboho regarding its historical pre-eminence. How relevant is that history today?

Let us get something clear and right, there is no history which is not significant. History, whether as a study or otherwise, is to give us insight into events of the past with a view to having a picture of future events. So, when future events occur, your understanding of similar events in the past will guide you on how to approach the future events. In this context, Igboho as former capital of Oyo Empire is a fact which is sacred and which cannot be erased. The Alaafin was ruling the entire Yorubaland from here, conquering more land and expanding to Kumasi in present day Ghana.

Where did the Alaafin derive that expansionist power?

We are talking of the king of Yorubaland. You should think of where and how such a personality would derive his power in a nation which comprised hundreds of towns and communities. He had an intimidating troop which he could deploy to prosecute any war any time. The Alaafin was highly feared beyond Yorubaland. And when the colonial administration came, the Alaafin’s authority was not only recognised, it was preserved based on the fact and figure they met on ground. There are British gazette to back up this claim. Have you ever asked yourself why the colonial officials would leave the coastal Lagos and trace the Alaafin to the hinterland? As I have said earlier, history will continue to play significant role in human development. It is not important that some deliberate distortions of history would be made. The truth remains sacred.

At what point did you think the Alaafin’s authority suffered erosion?

I should rather ask you who should also know to do your research into this matter. But for the benefit of the reading public, I make bold to say that politics was used to undermine the authority of the Alaafin, and that politics is a recent one. But the truth remains that the position of the Alaafin cannot be undermined. Till date, the reigning Alaafin of Oyo ensures that he lives for the entire Yoruba race in terms of preservation of Yoruba culture and tradition. Go to him for any issue about any Yoruba town or community, you would be shocked with the volume of facts he would dig out for you. He would tell you history of your town and the details you probably have never been told before. He keeps a rich library where he studies everyday as if he is preparing to write an examination. He has access to information which resolves disputes easily. If you see the traffic of traditional rulers visiting him day and night, you will know better what I mean.

You seem to have a grasp of Yoruba history. Did you study it in school?

I was born and bred in the royal house. You can say royal blood which runs in my veins is responsible with element of interest I showed in past events as they were being recollected by the elderly ones. I must say that I did not attend higher institution of learning. After my father died in 1972, my uncle tried to sponsor me to Baptist Modern School, Oke Afin, Igboho, after which I became a teacher at LSMB, Molete, Ilorin. I was like a junior teacher till 1978 when I left. At the end of the day, I became a printer. I had Abisoye Nigeria Press, Isale Asaka, Foko, Ibadan. I was doing my best in that trade. It may interest you that I lived at a place adjacent to your office back then. That was the period I had direct contact with the Nigerian Tribune.  So, my little understanding of History was as a result of my interest in any information about Yoruba.

What impact does you observe your passion for history has on you?

One of the impacts is that I am able to separate falsehood from the truth when both are placed beside each other. I feel somehow elevated during discussion of Yoruba issues. For instance when I read what the Alake of Egba recently said, I saw error in it but kept my cool for the interest of peace. I knew if I respond to it, my response would attract further response which I think is not good for us this time when we should be in peace with one another. But the truth shall be protected at all times. What is called Abeokuta today is a combination of different towns independent of one another. I don’t want to shake any table as the youths say now. But if anyone is interested in what I just said, the person should go to the library and read the history of Abeokuta.

Can we have a united Yoruba nation?

Answer to that question lies on the stakeholders. Our civilisation which we had long before the white men came, means we cannot all sleep and face one direction. We are too enlightened to be dogmatic. We have independent mind which is difficult to be tamed, hence our different voices on issues. But we can have a common ground if we say the truth and refuse to undermine tradition.

The best form of sex