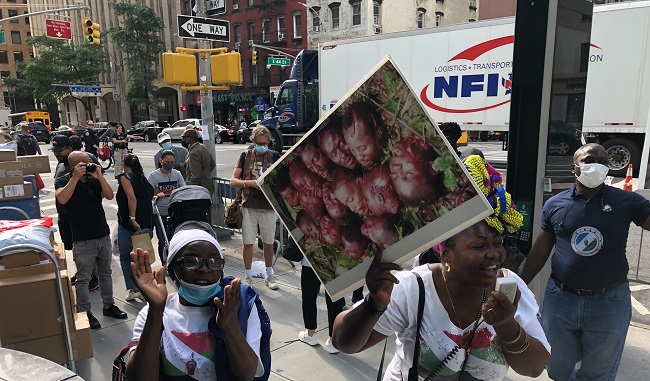 Some members of the separatist group, Yoruba Nation, have stormed the Nigerian Consulate in New York, demanding a separate state for the Yorubas who they claimed were no longer safe in Nigeria.

Displaying posters of Yoruba people allegedly killed by Fulani herdsmen, they blamed the present administration for emboldening the attackers and doing nothing to stop them.

One of the leaders of the protesters, who gave her name as Yoruba Wuyi, claimed that they embarked on the protest in Manhattan, New York, on Tuesday because their people were being allegedly slaughtered.

She said the present administration has done nothing to deter the terrorists from carrying out their dastardly acts on the Yorubas, claiming that the criminals appear to have access to state weaponry.

She also decried the constant resort to borrowing by the administration, alleging that arms procured with borrowed money have found their way into the hands of Boko Haram terrorists.

“Muhammadu Buhari will borrow money from everywhere in the world, use the money to purchase arms and ammunition from America and they will get to Boko Haram to kill the Yorubas, the Igbos, the Ibibios.”

“If you are a non-Fulani, you are not safe in Nigeria,” she alleged.

Also speaking, Akin Williams, insisted on a Yoruba state, saying that they don’t want to be part of Nigerians anymore.

“These people killing our people, you know, destroying our farms. Okay. We are tired of all those things. We want our own state,” said.

Similarly, another protester who gave his name as Jimmy said: “We want our Yoruba land. Nobody comes from Senegal, Mali and take our land away from us. This is the 21st century, nobody owns the land but God.”

On Monday, October 25, 1993, in the heat of June 12 annulment agitations, four Nigerian youngsters, Richard Ajibola Ogunderu, Kabir Adenuga, Benneth Oluwadaisi and Kenny Razak-Lawal, did the unthinkable! They hijacked an Abuja-bound aircraft, the Nigerian Airways airbus A310, and diverted it to Niger Republic. How did they so it? Excerpts…Yoruba in diaspora demand  Yoruba in diaspora demand

COVID-19: Over 1,800 receive funds as Okowa launches NG-CARES in Delta