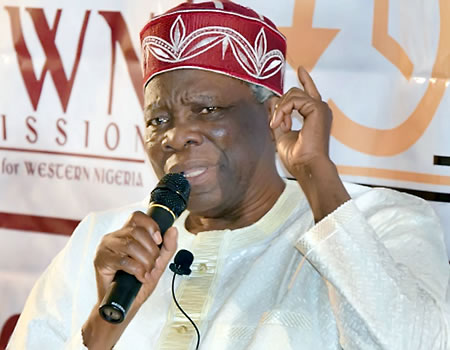 Foremost historian, Professor Banji Akintoye, on Tuesday announced that the Yoruba- speaking nation of Nigeria has been accepted as the 45th member of the Unrepresented Nations and Peoples Organisation (UNPO), saying the latest development represented a very important step in the collective quest of well-meaning Yoruba people to achieve the goal of dignity and self-determination.

UNPO, formed on 11 February, 1991 in The Hague, Netherlands, is an international membership-based organisation established to empower the voices of unrepresented and marginalised peoples worldwide and to protect their fundamental human rights, with members comprising indigenous peoples, minorities, unrecognised peoples or peoples of occupied territories.

Akintoye, who is the Yoruba Leader and President-General of Yoruba World Congress (YWC), revealed this in an electronic statement made available to newsmen, disclosing further that the Yoruba-speaking nation membership of the international body was contained in a letter addressed to him through the YWC Coordinator for Europe by her Secretary-General, Ralph Bunche.

The YWC President-General, while expressing joy at the development, said the membership offered the Yoruba nation a voice on the international stage via the machinery of the international body which maintains a permanent presence before the United Nations (UN), the European Union (EU) and the United States of America.

According to him, also with the latest development, the Yoruba nation, just like the Catalonian people of Spain, can put forth their organs of representation such as a people’s parliament and an indigenous people’s government “with a flag as our symbol.”

Akintoye, who is a Second Republic senator, further disclosed that the membership of UNPO affords the Yoruba nation an opportunity to participate in advocacy training, worldwide cultural festivals, election monitoring/observation, and sports activities, among the unrepresented nations.

Akintoye recalled that some formerly unrecognised nations who were members of UNPO but were now independent nations and members of the United Nations, include Armenia, East Timor, Estonia, Latvia, Georgia and Palau, stressing that the international body, like many others, had the capacity to help Yoruba nation achieve its goals within the Nigerian Federation.

“Some former members, such as Armenia, East Timor, Estonia, Latvia, Georgia and Palau have gained full independence and have joined the United Nations (UN) as full members.

“The peoples represented within the UNPO membership are all united by one shared condition: they are denied their equitable level of representation and voice in the institutions of the countries to which they currently belong and in international governance.

“As a consequence, their opportunity to participate on the national or international stage is limited and unfair, and they struggle against difficulties in their effort to realise their rights to civil and political participation and to control their own economic, social and cultural development.

“In many cases, they live under pressure of the worst forms of violence and repression, such as is being perpetrated by armed Fulani herdsmen and Fulani militias, as well as by terrorist Boko Haram, against many peoples of Nigeria, including our Yoruba nation; which violence and repression are being adroitly and surreptitiously supported by the government of Nigeria. In some cases, members of UNPO need serious help because they live in countries and under governments that actively resist their progress and destroy their achievements, as our Yoruba nation lives in Nigeria.

“The UNPO is able to address issues that often remain hidden because UNPO has the freedom to raise issues that others cannot raise due to political or funding constraints. Today, UNPO has more than 40 member-nations,” YWC President-General further recalled.