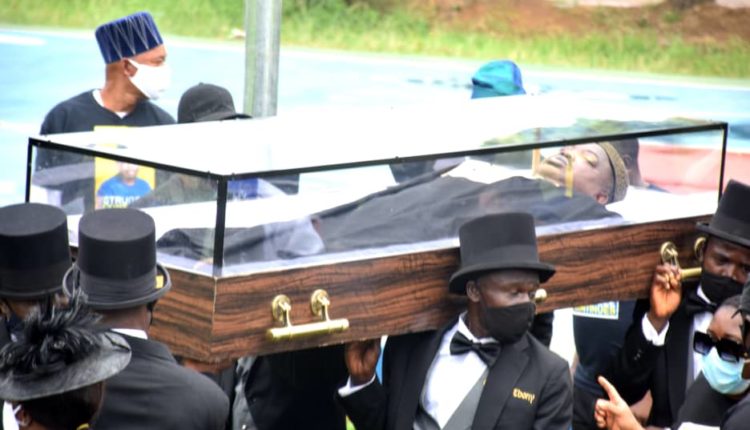 The leader of the pan-Yoruba sociocultural group, Afenifere, Pa Ayo Adebanjo, has said that getting a replacement for the late Yinka Odumakin, spokesman of the group, will be difficult.

Adebanjo made this remark on Thursday at the Service of Songs and Tributes for the late activist at Police College, Ikeja, Lagos.

The Yourba leader urged all to emulate Odumakin’s consistent life of selflessness and commitment to struggle for justice all his life.

Adebanjo said that late Odumakin’s quality was rare because he strongly believed in good cause and fought for it till his death.

He said: “As human, it is difficult to replace Yinka, but l pray God replace him for Nigeria.

“He was not a fake activist, but a true activist who believed in a good cause and true democracy. We are not gathered to mourn his age, but to celebrate what Yinka stood for.”

He urged other Nigerian activists to emulate the selflessness of late Odumakin.

The Afenifere leader, who said that he had long been standing for a united Nigeria and stood for it, called for a restructured Nigeria so that there could be unity.

According to him, those calling for restructuring are not calling for secession in the country.

“Those of us talking about restructuring truly want Nigeria to stay and be united.

“The suffering is much and if Nigeria is not restructured, we will continue to have more of Sunday Igboho and Nnamdi Kanu,” he said.

The Aare Onakakanfo of Yorubaland, Chief Gani Adams, in his tribute, also described Odumakin as an irreplaceable great man, saying he had lost a friend in Odumakin.

Adams said: “Yinka has created a vacuum which I don’t think any other activist in Yorubaland can easily fill.

He urged Nigerians to follow whatever good cause they believed in as Odumakin did and died for.

“When you are talking about true federalism, Yinka Odumakin was a great apostle. We have always been on the same page on ideology,” he added.