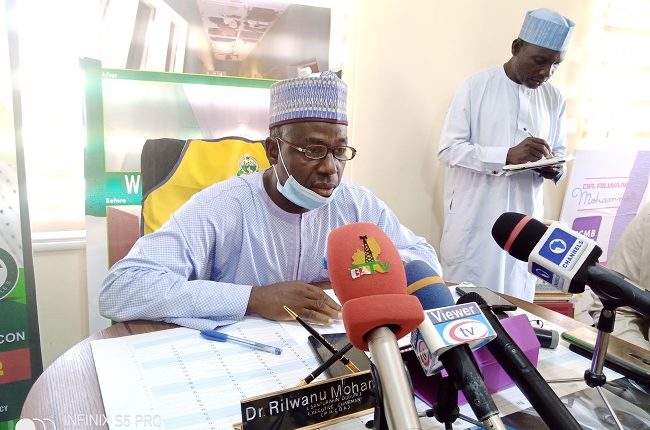 An outbreak of yellow fever has claimed eight lives while eight positive cases are active in Ganjuwa LGA of Bauchi State.

The disclosure was made by the Executive Chairman of Bauchi State Primary Health Care Development Agency (BASPHCDA), Dr Rilwanu Mohammed, while briefing Journalists in his office, on Monday.

Rilwanu Mohammed said that “Recently, mysterious deaths of people were reported in some villages in two wards of Ganjuwa LGA. Immediately our surveillance team moved in and took samples of the victims and it was confirmed that they were yellow fever positive.”

The BASPHCDA chairman explained that the discovery was made during the routine immunisation exercise in the area when it was reported that five people had died mysteriously and upon verbal autopsy yellow and Lassa fever were suspected following the description of the circumstances that led to their deaths.

He, however, added that, with the discovery of the virus in the area, proactive measures have been taken to ensure that the outbreak did not spread to other parts of the state saying that large quantities of yellow fever vaccines have been procured and will soon commence immunisation.

Rilwanu Mohammed who listed three types of yellow fever assured that the state government is ready to ensure that the outbreak remained in Ganjuwa LGA saying that already an isolation and treatment centre has been created in General Hospital, Kafin Madaki to curb the spread.

He, therefore, appealed to parents to release their children for vaccination to curb the spread of yellow fever stressing that, “since it is mosquitoes that spread the disease, people should please use the treated nets and ensure that their environments are kept clean.

The BASPHCDA Chairman also appealed to traditional rulers and community leaders to sensitise their subjects on the need to embrace vaccination and clean environment for their own good.

Meanwhile, Men particularly married men in Ganjuwa LGA of Bauchi State are now demanding for more supply of condoms in their support for childbirth spacing (CBS) in order to have a healthy family.

The disclosure was made, on Monday, by the Chairman, Ward Development Committee (WDC) of Kafin Madaki, Mustapha Ibrahim while speaking to Journalists who are members of the Bauchi Public Health Media Network on the activities of CBS in the area saying that the program has been well accepted by people of the area.

He said: “We as a Committee have embarked on serious awareness creation among the people and the program has been well accepted, men now come out publicly to demand the supply of condoms to support their wives but unfortunately, for now, there is stock out of the commodity here.”

Mustapha Ibrahim who said that men have come to understand that childbirth spacing is important considering the economic situation of the country said that the situation is very encouraging as mortality and morbidity rate of maternal and infant has positively improved in the areas.

The WDC Chairman appealed to the BASPHCDA to as a matter of urgency supply CBS commodities including condoms to the facility so that the clients can access the services.

While giving an update on the services of the PHC, The Deputy in charge of Primary Healthcare Center Kafin Madaki, Sani Usman said that not fewer than 58 CBS clients were recorded in the month of October 2020.

He, however, lamented that the facilities in the month under review recorded out of stock situation of childbirth spacing commodities saying that, “In the month of October 2020, on the average, we had 23 new clients in one week.”

He stressed that “In Oct 2020, we were out of stock but this is because of an increase in the number of clients we recorded”, pointing out that some of the challenges encountered with CBS services were with respect to minor undesirable side effects.

Sani Usman Shall who is a Community Health Officer said: “Because the new clients are just starting, they experience minor side effects and we counsel them appropriately.”

One major problem facing the facility according to him is lack of sanitation due to the negligence of the cleaners who have abdicated their responsibility of keeping the premises clean.

FG sets up committee on disposal of forfeited assets