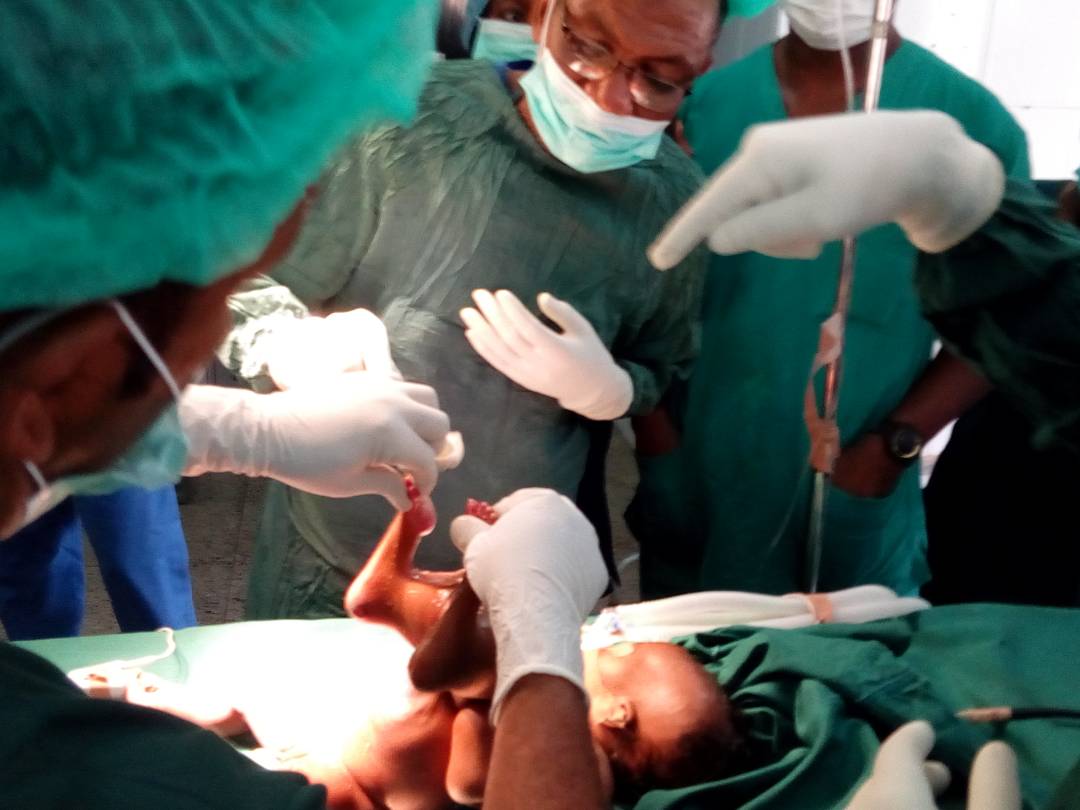 RESPITE has come the way of a 20-year-old housewife, Ikilima Shuaibu who delivered conjoined twins in Bauchi following the surgical operation to be sponsored by the Speaker of the House of Representatives, Yakubu Dogara’s free Medical Outreach.

Ikilima Shuaibu delivered the conjoined girls at Primary Health Care in Chanka, Alkaleri Local Government Area in December 2017 but sadly one of the babies who came out without a head died a few days later.

The Dogaras’ medical team is currently performing a surgical operation at the Abubakar Tafawa Balewa University Teaching Hospital Bauchi to save the life of the surviving baby that is also a girl.

The conjoined twins were joined in the stomach but unfortunately, one of them that was born without a head later died while the surviving baby was been named Ikilima after the mother.

Speaking to Journalists at the Abubakar Tafawa Balewa University Teaching Hospital on Monday, Ikilima who looked traumatized said she delivered the babies normal without undergoing any Caesarian section.

She said, “I gave birth to my twins in the clinic at Chanka but unfortunately the babies were joined together and we were referred to the Teaching Hospital. We have spent 2 months in the hospital receiving treatment until this morning when the doctors came and told us that they want to perform surgery to separate the twins.

“When I delivered the twins, one was complete the other came out without a head but was alive because I was feeling her movement but later died a few days later”, she said.

“This is my third delivery. I had two children before the coming of my twins and they were born normal, but the only problem I had while delivering my second baby was that placenta stuck inside my womb but was referred to another PHC in Gar where it was later removed,” Ikilima further said.

When asked if she attended ante-natal care, Ikilima who said she got married at the age of 13  said, “I attended antenatal only twice while I was pregnant and I didn’t undergo any scan throughout my pregnancy period”.

He said, “We are going to be separating conjoined twins today. Kilima was born with her sister joined in the stomach and Dr Kefas, a pediatric surgeon from this hospital and with a team of other doctors under the auspices of Yakubu Dogara Free Medical Outreach will separate them. We ask for the prayers of the public so that we have a successful surgery”.