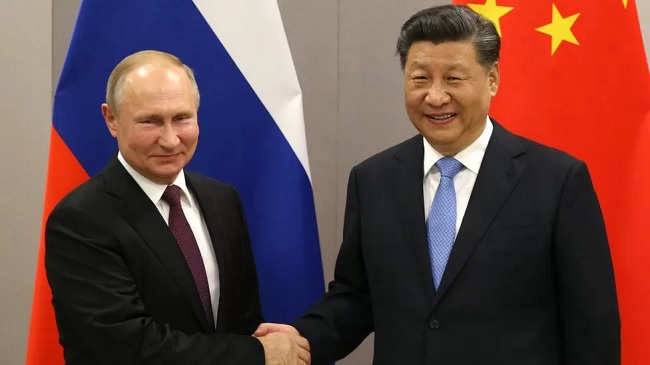 China’s leader Xi Jinping and Russia’s Vladimir Putin will discuss the war in Ukraine and other “international and regional topics” at their meeting later this week, the Kremlin says. (BBC)

The two will meet in Uzbekistan at a summit that will show an “alternative” to the Western world, the Kremlin said.

Mr Xi is making his first trip overseas since the start of the pandemic.

He is seeking a historic third term while Mr Putin’s relations with the West are at rock bottom over Ukraine.

Mr Xi is beginning his three-day trip in Kazakhstan, where he landed in the capital Nursultan for the first leg of his trip on Wednesday.

He will then meet Mr Putin on Thursday at the Shanghai Cooperation Organisation (SCO) Summit in Samarkand, Uzbekistan, which will run from 15-16 September.

Mr Putin will also meet other leaders including those of India, Pakistan, Turkey and Iran – but his meeting with China’s leader “is of particular importance”, said Kremlin foreign policy spokesman Yuri Ushakov.

He said the summit was taking place “against the background of large-scale political changes”.

China and Russia have long sought to position the SCO, founded in 2001 with four ex-Soviet Central Asian nations, as an alternative to Western multilateral groups.

The SCO meeting comes amid fresh clashes on the border between two of its members, Kyrgyzstan and Tajikistan. Reports say at least one border guard was killed and two injured – their nationalities are not known.

Sporadic clashes between the two countries, over a water dispute and other issues, broke out last year.

Mr Xi’s visit comes amid a fresh set of lockdowns in China, where his zero Covid policy is still in place. While the rest of the world has opened up, Beijing continues to shut down entire cities and provinces every time there is a rise in cases.

He has remained in China since then, leaving the mainland only once – in July this year to visit Hong Kong.

Mr Putin is also making a rare foray abroad. His meeting with Turkish and Iranian leaders in Tehran in July was only his second foreign trip since Russian troops invaded Ukraine.

This is the two leaders’ second meeting this year – they last met at the Winter Olympics in Beijing in February.

Following that meeting, the two leaders issued a joint statement saying the friendship between their countries had “no limits”. Russia invaded Ukraine days later – an action China has neither condemned nor voiced support for. Beijing, in fact, has said both sides are to blame.

China is not part of the international sanctions against Russia and trade between the two countries has continued to grow. Indian and Chinese imports of Russian oil have soared since the Ukraine invasion.

China too has seen its relations with the West and especially the US sour in recent months following tensions over self-ruled Taiwan. China claims the island as part of its territory.

Last month, Beijing staged a five-day military blockade around the island in response to US House Speaker Nancy Pelosi’s visit.

China watchers say Mr Xi’s decision to leave China after more than two years, despite significant domestic challenges – crippling lockdowns and a faltering economy – shows his confidence in his leadership.

Analysts expect him to be re-elected for an unprecedented third term at the upcoming Chinese Communist Party Congress in October.

China’s leader significantly reduced the risk that he would catch the coronavirus by not travelling internationally for more than two years (assuming, of course, that he has not already been infected and we don’t know about it).

Keeping Xi Jinping at home also served a propaganda purpose – it got the message out to Chinese people that they too should not travel abroad during this time of crisis.

Now that Mr Xi has decided to start travelling again, does it mean the Party considers it safer for him to do so?

Another question: if it wasn’t safe a year ago, why is it safe now?

Also, will images of Mr Xi in other countries lead to expectations that travel restrictions should be eased further to smooth the path for Chinese people to go overseas again?

In China, the government doesn’t feel the need to spell out its reasoning when making such decisions, so we never know exactly what the thinking is behind them.

However, this trip will be seen in China as a small indication that the country may soon see a reduction in its “zero Covid” measures.

I say “may” because, if the government has a plan to eventually bring an end to its strict coronavirus strategies, it’s certainly not sharing it with the public.

Russia to formally annex 4 more areas of Ukraine on Friday

My husband has Ph.D in staging coups, so nobody can overthrow him, says Sierra Leone…