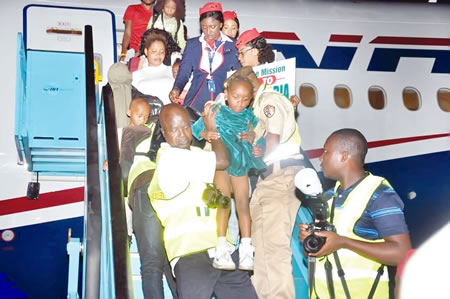 Olaniyan, who received the returnees on behalf of the state Gov. Mr Seyi Makinde, assured them of the state government’s assistance.

He said the assistance would not be monetary, ”but proper profiling of the returnees will be done to know specific areas to assist them, thereafter, they would make their proposals.”

Olaniyan said that the state government would consider those that qualified for government jobs when the state is ready to recruit workers.

He enjoined the returnees to abstain from any criminal acts, but see their return to their home state as an opportunity to excel.

Olaniyan said the current administration in the state was working hard to provide a favourable atmosphere for everyone to prosper.

The deputy governor announced a donation of a token of N30,000 to each of the 30 returnees as transport allowance back to their respective towns and villages.

Earlier, the Director of Media, Nigerian Diaspora Commission, Mr Abdul-Raman Balogun, on behalf of the Chairman of the Commission, Mrs Abike Dabiri- Erewa, commended the state government for welcoming the returnees that were indigenes of the state.

Balogun said 30 out of the 317 returnees were from Oyo State and that the commission was partnering with other agencies so that the returnees would be re-orientated, integrated and be empowered.

He said that over 400 Nigerians still in South Africa had equally indicated intention to return home.

Balogun said that it was the responsibility of the commission to take care of every Nigerian anywhere they might be across the world.

He welcomed the returnees back home and urged them to see their return as a blessing, saying they were better off being in their fatherland and that there were better opportunities in the country.

Balogun urged every Nigerian to be a good ambassador and representative of the country wherever they travelled to.

Some of the returnees, Temilade Olakojo, Oluwaseun Okeleye and Bolatito Lawal, pleaded with the state government to assist them, saying they returned to Nigeria with nothing as they had lost everything in South Africa.

The trio pleaded with the state government to give them jobs or empower them so that they can live better again.

Olakojo, a graduate of History and International Studies, said she had a registered business in South Africa and was doing well before the xenophobic attack.

Okeleye said he narrowly escaped the attack, but all his means of livelihood had gone with the attack.

Lawal, who was attacked physically, said his being alive was a miracle, but he lost everything he had struggled to save in South Africa.