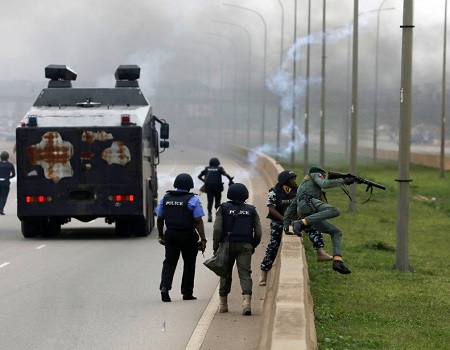 Between Sunday and Wednesday, mobs looted and destroyed shops, many of them foreign-owned, in South Africa’s commercial hub, Johannesburg.

Nigeria’s government has been outspoken in its condemnation of the violence.

Police say the unrest has subsided and more than 420 arrests have been made.

According to BBC, South Africa’s Foreign Minister, Naledi Pandor, called the violence an embarrassment for her country.

“Our government regrets all violence against foreign-owned stores or Africans from other countries who are resident in South Africa,” she was quoted as saying by national broadcaster SABC.

She ordered the closure of the country’s high commission in the Nigerian capital, Abuja, and its mission in Lagos, following threats made to the diplomatic staff.

Videos and images that have been shared on social media purporting to show Nigerians being attacked and killed have inflamed tensions.

On Tuesday and Wednesday, South African-owned businesses were targeted by protesters in several Nigerian cities, and the looters said the attacks were reprisals for the killing of Nigerians in South Africa. South African telecoms giant MTN closed its shops as a precaution.

In response to the violence in Johannesburg, two of Nigeria’s top musicians, Burna Boy, And Tiwa Savage, announced they were boycotting South Africa.

At least 10 people have been killed in the trouble in South Africa, including two foreign nationals, the South African government says, but none of the victims have been identified as Nigerian.

On Wednesday, Nigerian Foreign Minister Geoffrey Onyeama told journalists: “There are a lot of stories going around of Nigerians being killed, jumping off buildings and being burnt. This is not the case.”

Despite disputing the accounts of Nigerians dying in South Africa, the Nigerian government has been forceful in its condemnation of events there.

On Wednesday, it announced it was boycotting the World Economic Forum on Africa that is currently taking place in Cape Town in protest at the violence.

The president has also sent an envoy to South Africa to “express Nigeria’s displeasure over the treatment of her citizens”.