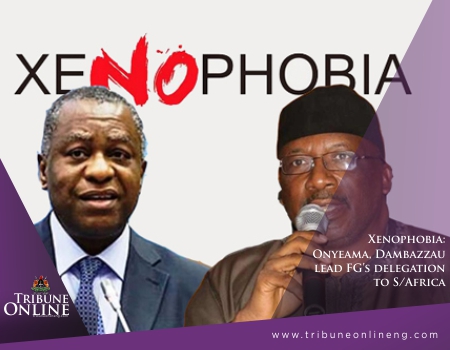 The delegation also has the Minister of Interior, Lieutenant-General Abdulrama Dambazzau (retd) and other diplomats.

“I used the opportunity of this meeting to brief Onyeama on the recent unfortunate violent incidents affecting foreign nationals in South Africa, including Nigerian nationals. In this regard, I highlighted the South African government’s condemnation of these incidents, emphasised that no single death has occurred during this unfortunate period.

“I reiterated South Africa’s condemnation of all forms of discrimination based on race, religion, sex or creed, including xenophobia or ‘Afrophobia’. I further affirmed South Africa’s constitutional democracy which enshrines human rights, bill of rights, democratic values, human dignity, equality and freedoms,” Nkoana-Mashabane said at a joint press briefing with the Nigerian delegation.

Nkoana-Mashabane, during the meeting at the international relations department’s Tambo building headquarters, also dispelled the notion that the incidents against foreign nationals in South Africa were targeted at Nigerian nationals only.

“I assured my counterpart (Onyeama) that the South African government was fully in control of the situation and several interventions, including meetings with diplomatic community and émigré communities, security operations, policy and legislation reviews were taking place.

“We both condemned these violent incidents against foreign nationals and the destruction of properties and reiterated our call for heightened law enforcement. We noted with concern the inciting statements or pronouncements including fake news peddled by certain individuals, political actors and other interest and pressure groups. In this regard, we called for an immediate stop to this,” she said.

Last month, several foreign nationals, particularly Nigerian nationals based in South Africa, came under violent attacks from members of the South African community, who accuse the foreigners of peddling drugs and taking their jobs. Several shops were looted in Gauteng province.

Nkoana-Mashabane said both the South African and Nigerian delegations at the meeting had agreed to continue working together and to enhance their diplomatic consultation on this matter and “many other matters relevant to the bilateral relations.”

The ministers acknowledged the pivotal role played by the Nigeria-South Africa Business Council in promoting and strengthening private sector participation in each other’s economies.

Senate, Hameed Ali and the ides of March

Apartheid may return to South Africa if AU, others don’t address Xenophobia now ―…