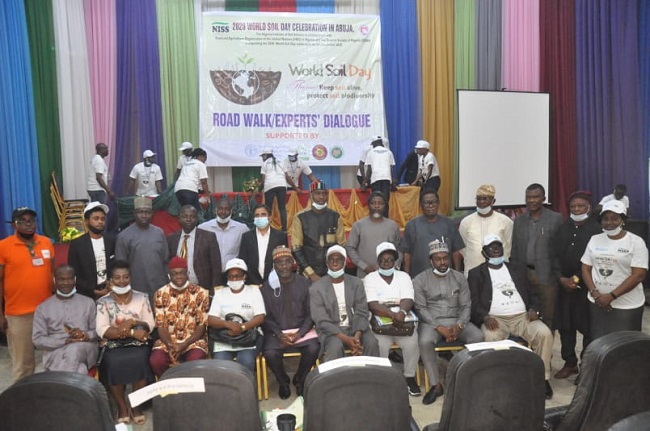 As Nigeria joins the rest of the world to mark this year’s World Soil Day, stakeholders in the agricultural sector have called for the protection of soil biodiversity, which they said would play a key role in achieving food security.

The stakeholders said soil also play role in human civiliSation, development and advancement, from food production, environmental interfacing to the sustenance of life on earth.

Speaking at the event of the celebration, the Vice President Nigeria Institute of Soil Science, Professor Geoffrey Nwaka, said the celebration seeks to raise awareness about the role soil plays in achieving food and environmental security.

“The day also seeks to raise awareness about the enormous role soil plays in the achievement of food and environmental security as well as providing an excellent opportunity to engage the general public and target government, education and academic sectors, farmers, the private sector, and the civil society in general.

He said the day further seeks to raise awareness on the importance of sustaining healthy ecosystems and human well-being by addressing the increasing challenges of soil biodiversity loss and raise the profile of healthy soil by encouraging governments, organisations, communities, and individuals around the world to engage in proactive improvement and sustainability of soil health.

“For the development and advancement of Nigerian soils and soil resources, the Nigeria Institute of Soil Science (NISS) is primarily charged with the responsibility of regulating the profession of Soil Science in Nigeria.

“It is clear that soil biodiversity. (I mean variation among the micro, macro, fauna and flora that exist and interact in soil system) has been degraded.

“This degradation means a decline in food production, the decline in greenhouse gas sequestration, retention of heavy metals in the soil, poor environmental health and increase in societal unrest since limited food is projected to be produced with the foregoing trend in soil biota global degradation and Nigeria is on a red list,” Professor Nwaka noted.

The Head of Inspectorate and Accreditation Department, Nigeria Institute of Soil Science, Nafiu Adewale, said the World Soil Day is a day dedicated purposely to bring consciousness and awareness to the society, to the policymakers and everybody on what and how you should be able to protect our soil.

“This years 2020 has a team of ‘Keep Soil Alive and Protect the Soil Biodiversity’, and the purpose of having this is to Make sure that there is consciousness on the part of our policymakers, our farmers, and every other people that have something to do with the soil so that they will know how to protect our soil and keep the biodiversity.

“What do we mean by biodiversity? We are talking about those living organisms that are within the soil, they play a very big role in making sure that our soils are alive for us to continue to have food and also to have security”, he explained

Adewale said if farmers are not protecting these living organisms in the soil, there is a tendency that at the end of the day, the soil will not be healthy and will not be able to produce the food that will be secured.

“Nigeria Institute of Soil Science is a parastatal under the Federal Ministry of Agriculture, and we have that mandate to regulate the soil science profession in the country, and also to look at issues that are related to soil.

NIPR gets study centre in Kaduna