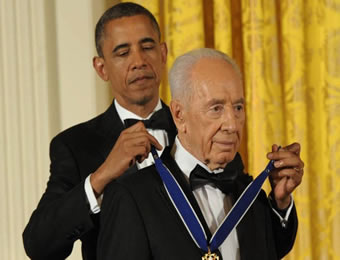 World leaders, who are currently mourning the passing of Israeli former leader, Shimon Peres, are expected to arrive in Israel in the coming days to attend Peres’s funeral on Friday.

US President Barack Obama and Britain’s Prince Charles, are among a who’s-who list of foreign dignitaries who are expected to arrive for his funeral.

The Foreign Ministry,according to The Jerusalem Post, held an emergency meeting in its situation room Wednesday morning to coordinate the logistics of the arrival of the most world leaders expected to visit the country at one time since Yitzhak Rabin’s funeral 21 years ago.

Both US presidential candidate Hillary Clinton and former president Bill Clinton are expected to arrive, as is US Secretary of State John Kerry and an as yet unnamed top senior British minister.

As of yet, there has been no announcement of the participation of a leader of an Arab state.

The arrival of the world leaders is taking part at a time of peak traffic at Ben-Gurion Airport, with hundreds of thousands of people both entering and leaving the country for Rosh Hashana.

Peres will likely be buried on Mt. Herzl in Jerusalem, in a reserved plot for the country’s founding fathers.

On Thursday, Peres’s coffin will be placed at the Knesset and the gates will be open to the public to pay their last respects. The funeral is slated for 11 a.m. Friday morning.

Obama mourned the death of Peres, calling him a friend whose moral imagination “changed the course of human history.”

“He was guided by a vision of the human dignity and progress that he knew people of goodwill could advance together,” Obama said. “He brought young people from around the world together because he knew they could carry us closer to our ideals of justice and equality.”

Former US president Bill Clinton said that with Peres’ passing, “Israel has lost a leader who championed its security, prosperity, and limitless possibilities from its birth to his last day on earth.

“The Middle East has lost a fervent advocate for peace and reconciliation and for a future where all the children of Abraham build a better tomorrow together. And Hillary and I have lost a true and treasured friend.”

Clinton recalled the famous moment in which Peres, then the Israeli Foreign Minister, signed the 1993 Oslo Accords on the White House lawn.

“I’ll never forget how happy he was .. heralding a more hopeful era in Israeli-Palestinian relations.”

“He was a genius with a big heart who used his gifts to imagine a future of reconciliation not conflict, economic and social empowerment not anger and frustration, and a nation, a region, and a world enhanced by caring and sharing, not torn asunder by the illusions of permanent dominance and perfect truth.

“His critics called him a dreamer. That he was – a lucid, eloquent dreamer until the very end. Thank goodness. Let those of us who loved him and love his nation keep his dream alive.”

French President Francois Hollande wrote on his Facebook page that the nation of Israel had lost an “illustrious statesman,” an “ardent defender of peace” and a “loyal friend to France.”

“In the eyes of the world, Peres was Israel,” Hollande wrote.

UN Secretary-General Ban Ki-moon also reacted, saying that Peres had worked tirelessly for a two-state solution so that Israel could “live securely and harmoniously with the Palestinians and the wider region.”

It was a “commitment duly recognized when he shared the 1994 Nobel Peace Prize with Yitzhak Rabin and Yasser Arafat.  He was also a good partner of the United Nations, eager to see Israel contribute to the work of the international community,” Ban said.

“I met Mr. Peres on many occasions, and always benefited from his views.  Even in the most difficult hours, he remained an optimist about the prospects for reconciliation and peace.

“As he once said at the United Nations, “The time has come to comprehend that the real triumph is in the harvest of peace, not in the seeds of another war.  When we replace war maps with peace maps, we will discover the differences were minimal.  The wars were appalling.  We shall see that the promised land could have become the land of promise a long time ago.”

“May his spirit of determination guide us as we work to ensure peace, security and dignity for Israelis, Palestinians and all the peoples of the region.” Ban said.

“Peres has never lost hope in peace, and has never stopped working to turn hope into reality. Even in the darkest moments his wit, his irony, his obstinate pursuit of dialogue have been a source of inspiration for many around the world, including myself,” she said.

“President Peres believed that the best way to serve the State of Israel and to deliver security to the Israeli people was through peace with the Palestinians,” she added. “We can only honor his memory with a daily commitment to reconciliation, preserving and advancing his vision for a two-State solution.”

Among the extensive list of foreign dignitaries and world leaders, past and present, to express their sympathies was former British prime minister and past Middle East Quartet envoy Tony Blair.

“Shimon Peres was a political giant, a statesman who will rank as one of the foremost of this era or any era, and someone I loved deeply,” he asserted.

The longest serving of all of Israel’s public servants, Peres was a person about whom it could rightly be said: The history of the State of Israel is the history of Shimon Peres.

A lifetime searching for peace with Israel’s Arab neighbors was rewarded on December 10, 1994, when Peres – along with then prime minister Yitzhak Rabin and PLO chairman Yasser Arafat – received a Nobel Peace Prize. The award recognized their work as the architects of the 1993 interim peace deal known as the Oslo Accords – a pact that to Peres’s dismay never hardened into a lasting treaty.

In a career spanning nearly 70 years, Peres was considered a servant of the state who was intimately involved in every aspect of the country’s history since before its founding. In his 48 years in parliament – from the fourth Knesset in 1959 through the 17th in 2007 – Peres served in various parliamentary groups, including Mapai, Rafi, Labor, the Alignment, Labor, One Israel, Labor-Meimad, Labor-Meimad-Am Ehad and Kadima. His main affiliation was serving as chairman of the Labor Party.

Peres’s string of government roles included two stints as prime minister – from 1984 to 1986 as part of a rotational government, and for seven months in 1995 and 1996 after the assassination of Yitzhak Rabin – as well as minister of immigrant absorption, transportation, information, defense, communications (or posts and telegraphs as it was known at the time), internal affairs, religious affairs, foreign affairs, finance, regional cooperation, and development of the Negev and Galilee, serving in some of those positions more than once. He also served several times as acting prime minister, deputy prime minister and vice prime minister.

Ironically, though Peres ran for office five times from 1977 and 1996, he never won a national election outright.

Peres was born August 2, 1923, in Wiszniewo, Poland, as Szymon Perski, and immigrated to Palestine with his family at the age of 11. He grew up in Tel Aviv, attending the Balfour and Geula schools in Tel Aviv, and the agricultural high school in Ben Shemen. He spent several years at Kibbutz Geva and Kibbutz Alumot, of which he was one of the founders. In 1943, was elected secretary of the Labor-Zionist youth movement.