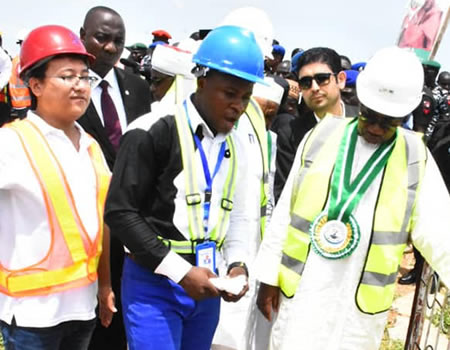 Share
In a determined effort to finding a lasting solution to the perennial and seemingly water supply problems in Bauchi metropolis, the Bauchi State Government in collaboration with the World Bank is to spend the sum of $65.5 million for the expansion of the water sector in the state.
This was disclosed by the Permanent Secretary, Ministry of Water Resources, Bauchi State, Umaru Shehu, at the official flag-off of the Bauchi Urban Water Sector Reform Project held on Thursday, stressing that the project will be funded through a credit facility from the World Bank.
He said that “the project will be counter funded by the state government to the tune of $6.5 million with a timeline completion of June 2020.
However, because of the delay in the take-off of the project, a one-year extension had been applied to the relevant authorities.
The Permanent Secretary added that “this will enable the completion of the project by December 2021. This multi-billion naira project is designed to ensure affordable, economical and sustainable access to water services to all customers within its area of coverage.”
He also said that the major components of the Urban water sector reform project involves the rehabilitation and expansion in Bauchi metropolis which includes the rehabilitation of Gubi Dam at the cost of N791, 981, 863. 60.
Umar Shehu further said that: “The rehabilitation and expansion of the Gubi water treatment plant will be done at the cost of N1, 235, 611, 461.32, rehabilitation of tx mains from Gubi Dam to Warinji and Buzaye Reservoir at the cost of N2, 987, 873, 720.20 and N937, 000, 000 respectively.
He explained that “replacement of 50km mains distribution network and installation of bulk meters 40 for water production plant reservoir and boundaries of distribution (pressure and billing) zones will be done at the cost of N2, 283, 581, 514.24.”
According to him, the extension of 100km main distribution network will cost N1, 235, 611, 461.32 while the construction of a 7,000m concrete reservoir at Buzaye Hill and the rehabilitation of 7m2 by 11, 000m3 and reservoir at Warinji Hills will gulp N2, 987, 873, 720.26.
Others are the expansion of Treatment Plant at the cost of N1, 382, 727, 740 and the construction of 500mm mains at Gubi Dam junction to the Reservoir at Buzaye Hills at the cost of N890, 470, 864.53
The Permanent Secretary also said the part of the project will be the Construction and equipping of Water Treatment Plant Laboratory in Bauchi and Azare, rehabilitation of power line in Gubi Dam facilities and Gubi Dam access road and Gubi staff Quarters.
He described the project as a landmark event in the state government’s quest to address the seemingly perennial water shortage in the state capital and its environs.
In his speech, the Managing Director, Bauchi state Urban Water and Sewerage Corporation, Engr. Aminu Gital, in his speech, said that the last expansion works with an installed capacity of 45 million litres (10 million gallons per day) for the Bauchi Township Water Supply popularly known as Bakalori Project, was commissioned in 1992, some 27 years ago.
He said that it was meant to meet the water demand of the metropolis up to 2005, however, the envisaged expansion after the design period has lapsed was not carried out until now under the Third National Urban Water Sector Reform Project.
According to him, the project is a six-year World Bank-funded project designed to support the states of Bauchi, Ekiti and Rivers to increase access to improved water supply in the state capitals and to improve the financial viability of the water utilities adding the Project became effective on 12th February 2015 and will officially close in June 2020.
Aminu Gital said: “The project is expected to resolve the water supply challenges of Bauchi metropolis presently and up to the year 2027, it is meant to rehabilitate and upgrade the facilities to supply 75 million litres (18.75 million gallons) per day.
“The overall progress of works is about 25%. We are optimistic that the works will be concluded before the official closing date of June 2019. This, we have reiterated to the contractors and we are synergizing to ensure that it is achieved.
While flagging off the project at the Piro Gubi Dam site, Bauchi State Governor, Bala Abdulkadir Mohammed said that over N137 million has been released to the Bauchi State Urban Water and Sewerage Corporation as part of efforts to find a lasting solution to the shortage of water supply in the state since he came on board as governor.
The governor also said that his administration has taken measures to find a lasting solution to the challenges facing water supply as efforts are ongoing to ensure improvement in the sector before 100 days of his the government.
The governor who regretted that he has inherited dilapidated infrastructure in the water sector assured that water facilities would be activated to ensure effective water supply in the state.
Governor Bala Mohammed noted that the multi-billion naira project was designed to ensure affordable, economical and sustainable access to water services to all consumers within areas of coverage and it was expected to be completed by December 2021.
The Project Consultant, Mr Joern Schwarzer believed that when completed, the project will impact positively on the well being of people of the state especially in terms of sanitation and hygiene.

Man in police custody over knife attack on EKEDC staff