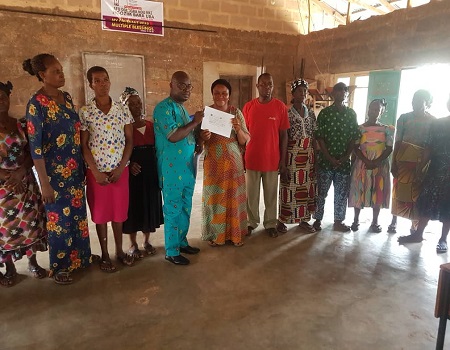 The cheques, which are for the execution of their chosen micro-projects, were presented to them at their various communities.

For Udo na Oganiru Vulnerable Group Owerre Ezukala, cheques for over four point six million naira were presented to them for the construction of open market stores and sinking of two boreholes.

Presenting the cheques yesterday, at the various communities, the General Manager, Anambra State Community and Social DevelopmentAgency, Mr Chudi Mojekwu, while announcing that the cheques represent fifty per cent first tranches, stressed the need for strict compliance with the laid down specifications, rules and regulations guiding the
project.

Mr Mojekwu charged the communities to give their undiluted support to the Vulnerable Groups to complete the projects in record time since according to him, the projects will benefit the entire community and beyond.

The Transition Committee Chairman for Orumba South Local GovernmentArea, Mr Raymond Onyegu, who described the project as a bottom-top approach to development, assured to give them all necessary support to complete the projects in record time and seek for more.

In their separate contributions, the President-General of Ndiokolo Development Union, Mr Fidelis Nwafor and the President of Umuonyibavillage Ufuma, Mr Ephraim Nwafor extolled Governor Wille Obiano for availing them the opportunity of being part of the beneficiaries adding that his administration remains the best to them.

The chairpersons of the various vulnerable groups described the projects as a dream come true and a new dawn in their communities.