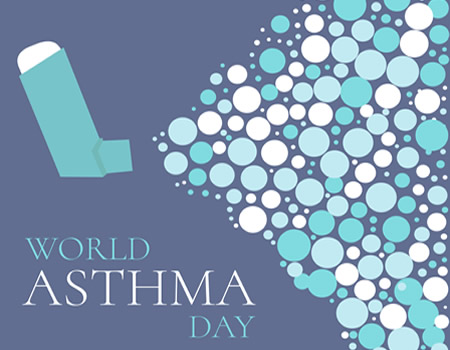 Ige made the disclosure in an interview with the News Agency of Nigeria (NAN) on the sidelines of a sensitisation walk organised to mark this year’s World Asthma Day.

The walk was organised by Nigeria Association of Asthmatics, UCH branch, in collaboration with Department of Public Health Nursing, UCH, with the theme

The chest physician said asthma was caused by inflammation in the breathing tubes that carry air in and out of the lungs.

He added that “the inflammation can mean that the tubes are narrow, making breathing difficult. The tubes can also become blocked with mucus.

“Those affected with asthma often have difficulties breathing due to the lung condition. Asthma is a life lung illness. There is no cure for it but it can be controlled.

“Sometimes, asthma is diagnosed in childhood and even in later years.”

According to the physician, certain factors trigger attack of asthma and they include: allergens such as dust mites, animal fur and pollen, chest infection, some exercises, cigarette smoke and gases.”

He said “this genetic factor also affect patients whose mothers had ectopic pregnancy before.

“Climate change or extreme weather conditions are major risks in for  asthma.

“Complications of asthma include tiredness, stress, anxiety and depression and when these happen, emergency medical help should be sought.

“If patients and the public are aware of these facts, the prevalence of asthma will be reduced, diagnosis will be better and treatment will be effective.”

The consultant said asthma could be treated with oral medications and inhalers, noting, however, that oral medications work slower than inhalers “because it must pass from the stomach to the bloodstream and then to the lungs.

“Inhaler therapy goes straight to the lungs and is the fastest, most effective way to control asthma.

“Inhalers are of two types: the Relievers which give rapid relief from symptoms and the Controllers- which help the swelling and inflammation in the airways.

“They help asthma attack and should be used every day even when the patient feels well.”

World Asthma Day is globally celebrated on May 2 to spread knowledge about the disease.