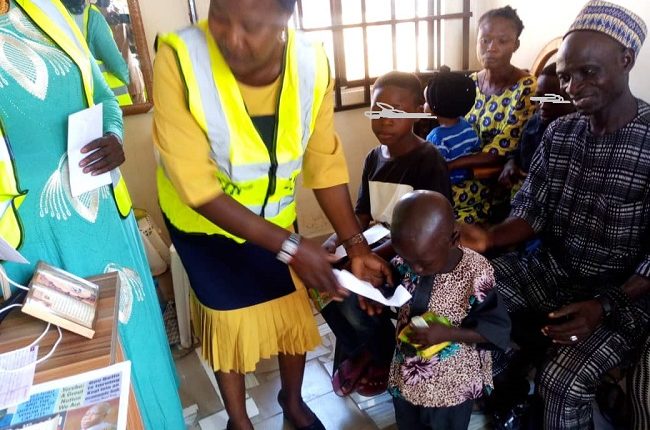 Speaking with newsmen shortly after the cash distribution in Lokoja, the Executive Director of DCI, Pastor (Mrs) Roseline Alabi, said the gesture was to commemorate this year’s ‘World AIDS Day’.

She said that the donation of N5000 to each beneficiary by DCI, targeted at the vulnerable women and children living with HIV, was ongoing simultaneously across the three senatorial districts of Kogi State.

“Our target is to reach out to the vulnerable women and children living with HIV especially children who are orphans,” Alabi said.

She commended the government for given DCI a conducive environment to operate while thanking individuals who had always been supporting the NGO in reaching out to the less privilege citizens of the state.

She thanked Mr Chinoso Azuka and his wife Hannah Chinoso, who are based in diaspora in Finland, for the donation of the sum of N200,000 to DCI through their Sister, Mrs Chineye Ututo, which were being distributed today to the beneficiaries across the state.

The executive director also expressed her gratitude to the Managing Director of Treasure Bakery, Dr Femi Akande and his wife, for their moral and financial support to DCI in putting a smile in the faces of the vulnerable women and children always.

She thanked Hon Mrs O.M. Obayemi, the former Kogi Commissioner for Women Affairs, for providing office accommodation for the DCI free of charge, and prayed that God would take care of her and her family.

She further appreciated the present Kogi Commissioner for Women Affairs, Hajia Fatima Buba Kabir, for always reaching to this children from time to time including the food palliative received from the ministry which was distributed to vulnerable accordingly.

She appealed to corporate organisations, philanthropists and well-meaning individuals to come and support the DCI in reaching out to the less privilege citizens of the state.

In her vote of thanks, the Project Coordinator of DCI, Mrs Gloria Adewole, thanked the executive director for her honesty, while advising the beneficiaries to use the money judiciously.

Responding on behalf of the beneficiaries, Mrs Medinat Abdulkareem, thanked the NGO and the donor for the gesture in putting a smile on their faces and prayed God to bless and protect them always.

World AIDS Day takes place on 1 December each year. It’s an opportunity for people worldwide to unite in the fight against HIV, to show support for people living with HIV, and to commemorate those who have died from an AIDS-related illness. It was founded in 1988.

The theme for World AIDS Day 2020 is “Ending the HIV/AIDS epidemic: Resilience and Impact.”