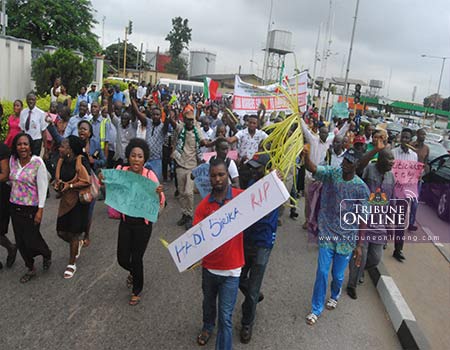 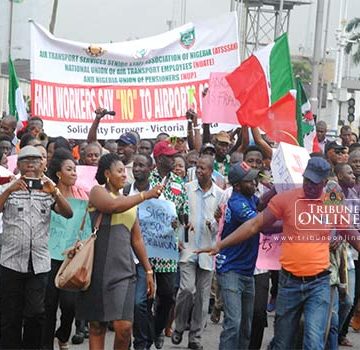 WORKERS of the Federal Airports Authority of Nigeria (FAAN) yesterday staged a peaceful protest again the recent announcement by the Vice President Yemi Osinbajo that the Federal Executive Council (FEC) has approved the concession of the Lagos and Abuja international airports.

Many of the FAAN workers led by the aviation unions stormed the Freedom Square leading to the entrance of the FAAN headquarters as early as 8.00am to express their disagreement towards what they described as illegal selling of the airports to people who are unknown to workers.

Addressing the workers, ATSSSAN National President, Comrade Illitrus Ahmadu said the workers were opposed to the concession of airports because of the uncleared status and the parameters used by government.

Ahmadu said the workers will use every instrument at their disposal to battle government to frustrate the concession of airports.

According to Illitrus, the unions must be united to protect their collective interest of protecting their jobs.

Also speaking, General Secretary of National Union of Air Transport Employees (NUATE), Comrade Olayinka Abioye said the unions will mobilise to frustrate airports concession moves by government insisting that government needs to engage the unions before government could consider the concession of the airports.